"Peter Rabbit" Teams Up with the U.N. on Global Campaign to Mobilize More Food Heroes

Culver City, Calif., – June 10, 2021 – Peter Rabbit has joined forces with the United Nations (UN), the UN Food and Agriculture Organization (FAO) and the UN Foundation to enlist more food heroes, like Peter, who see the value in fruits and vegetables for a balanced diet and a healthier planet.

Ahead of World Food Day in October, the United Nations, FAO and UN Foundation have teamed up with Peter Rabbit and his friends from Sony Pictures’ Peter Rabbit 2: The Runaway to encourage their fans to be food heroes by taking actions like eating more healthy foods, buying at local gardens and farmers markets where possible, reducing food waste and planting their own garden – big or small.

As part of the campaign, a new Public Service Announcement has been launched which features Peter and his friends tackling some of the most important issues regarding sustainable foods.

“It’s an honor that our Peter is working with the United Nations for this worthy cause which will bring awareness to some very important issues that are very dear to Peter’s heart. Sustainable food and the environment is at the core of the Peter Rabbit stories so we are really happy that the UN, FAO and the UN Foundation see Peter as an important voice for this important matter,” said Will Gluck, writer, director and producer of Peter Rabbit 2: The Runaway.

“Peter Rabbit is a fun-loving character loved by children and fans worldwide," said Maher Nasser, Director of Outreach in the United Nations Department of Global Communications. “Peter can help the United Nations reach new and important audiences. His voice is a great way to speak to children and their parents about the importance of healthy eating, buying local produce and other sustainable practices that are important to their health and the health of our planet. We should all aspire to be food heroes.”

“Transforming the way we produce, consume, and think about food is essential in this make-or-break year for our planet,” said Elizabeth Cousens, President and CEO of the UN Foundation. “We are extremely grateful to Sony Pictures for getting Peter Rabbit and his fans to help remind us that we all have a role to play, and that each of us can take action in our own lives as food heroes.

“FAO celebrates food heroes who help transform our agri-food systems and try to make sure everyone, everywhere has access to enough affordable, nutritious food,” said FAO Director-General QU Dongyu. “We are delighted to have Peter Rabbit and Sony Pictures helping us to have a conversation with children and families about why food heroes are important, so they can learn how to do their part and be food heroes too.” 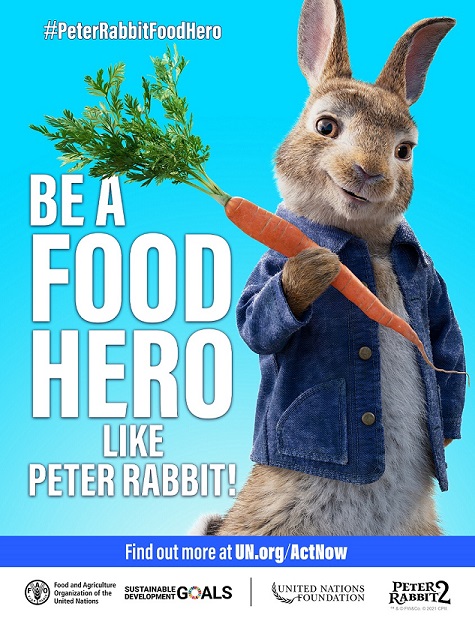 To support the UN and FAO, Peter Rabbit will do his part as a food hero by also helping to launch the World Food Day poster contest in over 100 countries worldwide, and appearing in a World Food Day children’s activity book. The campaign wants to encourage youth and their families to become #FoodHeroes like Peter and his friends, by choosing healthy food, reducing food waste, and celebrating other food heroes who work hard to get food to our plate every day.

You can also join Peter and his friends and learn how to be a food hero through the un.org/ActNow website, the mobile app, and at fao.org/world-food-day.

(Watch the newest trailer of Peter Rabbit 2: The Runaway at https://youtu.be/u_6epDAeAl0)

About Peter Rabbit 2: The Runaway

In Peter Rabbit 2: The Runaway, the lovable rogue is back. Bea, Thomas, and the rabbits have created a makeshift family, but despite his best efforts, Peter can’t seem to shake his mischievous reputation. Adventuring out of the garden, Peter finds himself in a world where his mischief is appreciated, but when his family risks everything to come looking for him, Peter must figure out what kind of bunny he wants to be.