Love Is Written In The Stars IN New WeTV Original Kilig Series “Boyfriend No. 13” 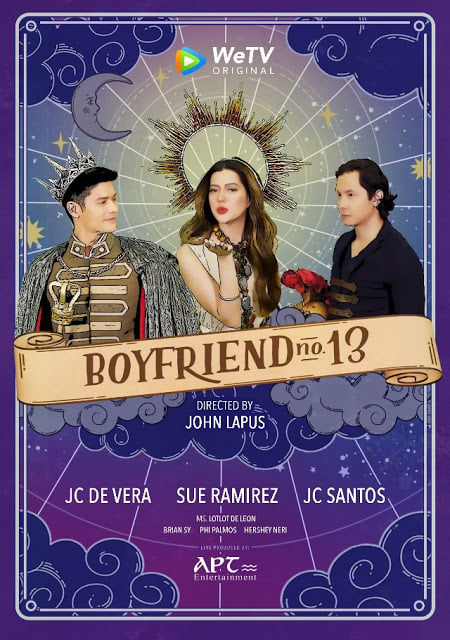 Manila (June 23, 2021) – “Good morning, Philippines! Isa na namang step patungo sa true love!” This is the battlecry of Kimverly Santillan, the yet-to-be-lucky-in-love lead character in the new WeTV Original romantic comedy series, Boyfriend No. 13, when she wakes up in the morning. Finding “the one” is her goal in life, and she is counting on destiny to deliver! But fate has a few tricks and surprises up her sleeve. Join Kimverly on her journey to finding her soulmate when Boyfriend No. 13 starts streaming for FREE on WeTV on July 02, Friday, at 7:00PM. New episodes drop weekly.

Boyfriend #13  puts together a talented cast to tell this unusual love story. One of Philippine showbiz’s most in demand actresses, Sue Ramirez, plays Kimverly, the twentysomething romance novelist at the center of the series. She lives her life according to the cards, the stars, and her superstitions. Her every move is calculated to deliberately avoid misfortune and ensure that her life is as close to perfect by letting her many "pamahiin" guide her way. Reading her daily horoscope, wearing lucky charms to ward off bad luck, and regularly consulting fortune tellers are some of Sue’s favorite go-to’s to being happy.  When she meets the tall and charming doctor, Don Lee, played by the hunky and handsome JC De Vera, all signs indicate that he is her destiny. Or is he really? On the other hand, there’s the rogueish and rugged officemate Bob, played by the boyishly goodlooking JC Santos, who needs a writing mentor. The problem is, the next guy will end up being her Boyfriend No. 13! With two very dashing choices, what is Kim going to do now?

Boyfriend #13 is the newest WeTV Original series produced by the streaming service, and its second romantic comedy for 2021. Actor / writer / comedian John “Sweet” Lapus came on board as director, injecting a good dose of comedic flair, charm and kilig feels – with pamahiin in tow – to the eight-episode series. “Everyday, excited kami dumating sa set to work,” is how Sue described the twelve day locked-in shoot. Sweet also played a key role in the casting, with Sue and JC Santos being his first picks for Kim and Bob. For the role of Don, he wanted an actor who is your classic handsome guy – and JC De Vera was tops on his list. The idea of having both male leads named “JC” just made the casting even more appealing. Rounding out the talented cast are Lotlot de Leon, Phi Palmos, Hershey Neri, and Bryan Sy. The series is line-produced by APT Productions.

Of course, what is a good love story without a cute and upbeat theme song. Takot Lang Masaktan delivers on all points with its hugot-inspired lyrics set to a pop-py beat that will have you singing along in a minute. Throw in a short rap, and this song is lit! Sue Ramirez shows off her vocal (and rapping!) skills in this tune that will be soon be your favorite LSS-track. The official lyric video for the song was just launched on the WeTV and Boyfriend No. 13 social media accounts. You can also stream this happy tune on Spotify!

Since WeTV already knows how Boyfriend No. 13  will have you falling in love with each new episode, you can share the love with the official sticker pack on Viber! The first batch of cute and kilig stickers - featuring the three lead characters and the 12 zodiac signs – will have your friends going gaga when added to your messages. Download the sticker pack for free, and stay tuned for more quotable quotes and fun photos coming soon.

WeTV launched the official trailer for Boyfriend No. 13 during its recent press conference, which was also livestreamed on the WeTV Facebook page. It may have been just over a minute long, but I think we heard many hearts go aflutter across the internet when JC Santos and JC De Vera, as Bob and

Don, came onscreen. But who wins Kim’s heart in the end? The answer will be revealed when the series premieres on July 02, Friday at 7:00PM. New episodes drop weekly, so abangan!!!

Watch the full trailer of Boyfriend No. 13

To stream all the WeTV Originals and the very best in Asian Premium Content, original series, Filipino shows and anime, just download the WeTV and iflix app from the App store and Google Play, and start watching! A monthly subscription rings in at only P59, quarterly at P159, and an annual subscription is only P599 for recurring subscriptions, while a one-month pass is only P149.

Since it was first launched in 2019, WeTV is now available in Indonesia,  Malaysia, Thailand, Philippines, India, and other territories, accelerated by its acquisition of the iflix brand and resources in the past year. The platform is centered on delivering Asian premium content and original productions – which they can stream anytime, anywhere and on any device – to its users globally.