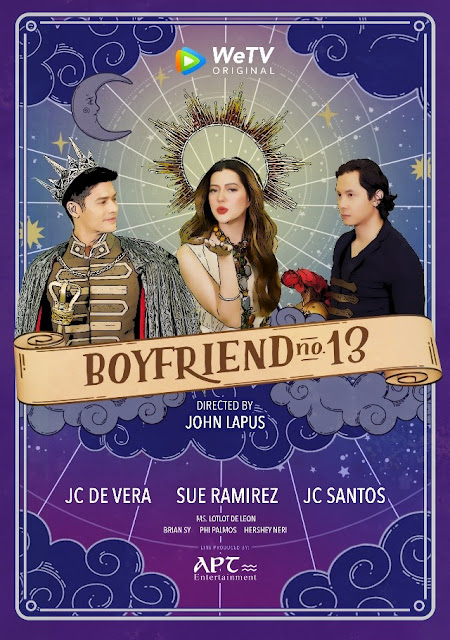 Manila (May 28, 2021) – Are you still in search of the one? Have you ever wondered about what’s written in the stars when it comes to love? That is the question on everyone’s mind in the new WeTV Original romantic comedy series, Boyfriend #13, coming to the streaming service this June.

In Boyfriend #13, Sue Ramirez plays Kim, a twentysomething modern girl with some pretty old school beliefs. Her every move is calculated to deliberately avoid misfortune and ensure that her life is as close to perfect by letting her many superstitions or "pamahiin" guide her way. Reading her daily horoscope, wearing lucky charms to ward off bad luck, and regularly consulting fortune tellers are some of Sue’s favorite go-to’s to being happy.  When she meets the tall and charming Don, played by JC De Vera, all signs indicate that he is her destiny. Sue devises a plan with her officemate Bob (JC Santos) to evade this misfortune. But how does she really escape it when it's fate?

Boyfriend #13 is the newest WeTV original series produced by the streaming service, and its second romantic comedy for 2021. Directing the very talented and charming cast is one of the country’s top comedians, John Lapus. Get ready for all the kilig feels, with all the matching pamahiin in tow, when the series premieres on WeTV this June.

To stream all the WeTV Originals and the very best in Asian Premium Content, original series, Filipino shows and anime, just download the WeTV app from the App store and Google Play, and start watching! A monthly subscription rings in at only P99, quarterly at P269, and an annual subscription is only P999.

Tencent Video is China's leading online video platform with over 100 million paid subscribers, and WeTV is a product launched by Tencent Video for overseas users. Since 2019, WeTV is now available in these markets: Indonesia,  Malaysia, Thailand, Philippinesh, India, and others. WeTV is the first Chinese streaming service platform to be launched in multiple overseas regions. The platform is centred on high-quality Tencent original Chinese language content and continues to expand quality content in other Asian countries and regions.