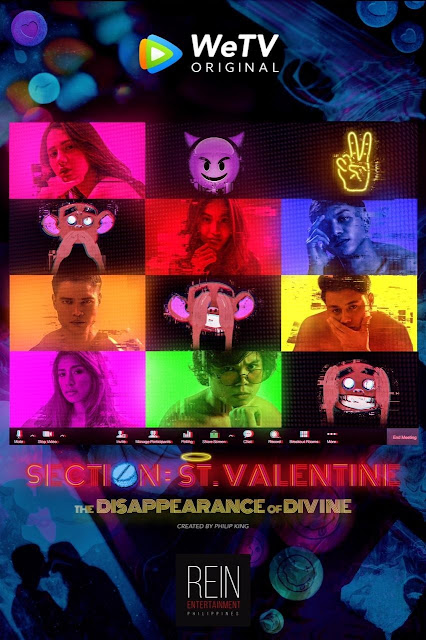 Manila (December 28, 2020) – As they say, the new normal has forced all of us to make a shift in the way we live our daily lives. Terms like WFH (work-from-home) and online school have become everyday speak. How is everyone coping and moving forward? WeTV Original series Section St. Valentine: The Disappearance of Divine takes a look at how the new normal impacts the lives of its central characters.

The series opens at the start of the new school year and the new protocols are announced. Divine, James, Matthew, Anna, Brian, Valiant are high school classmates at the Manila International School. All classes are to be conducted online. As the professor starts roll call, one student – Divine Concepcion – is noticeably missing.

Where did she go and what happened to her? That is the big mystery which sends her classmates on a hunt to discover the truth.  They troll digital channels, social media, and join secret online meetings as they try to trace her whereabouts. The question is, will they find her before it’s too late. Not unless one of them is behind it all.

Created by writer / director Philip King, Section St. Valentine tells a compelling story for these strange times. Joining him in this narrative is a cast of up-and-coming young stars who show us a different side to how the young are living with the new normal. Leading the cast are Arielle Roces as the controversial Divine Concepcion, Royce Cabrera as James Payson, Jem Macatuno as Matthew Tagle, Aedel Peña as Anna Hizon, Raphael Robes as Brian Tenchavez, Polo Laurel as Valiant Gorospe, and Thamara Pacursa as Helena Montemayor

The WeTV Original Series Section St. Valentine: The Disappearance of Divine will be coming exclusively to WeTV Philippines and WeTV/iflix on January 15, 2021. The show was filmed during the lockdown by King and the Rein Entertainment Productions team.