Right on the heels of the ongoing back-to-back successes of its two digital series, "Small Talk" and "Taguan," TBA Studios has just announced its acquisition of a new full-length feature, the internationally-acclaimed film "Lingua Franca." A film festival favorite (an official selection in over 40 international film festivals including the Venice Film Festival where it had its world premiere) "Lingua Franca" is the provocative story of Olivia, an undocumented trans Filipina immigrant working as a caregiver to Olga, a Russian-Jewish grandmother living in Brooklyn, New York. When the American man she's secretly paying for a green-card marriage backs out, Olivia becomes romantically involved with Olga's grandson Alex, a slaughterhouse worker who is totally unaware that she's a transgender. Unflinchingly candid and intimate, "Lingua Franca" is the third narrative feature of writer-directoractress Isabel Sandoval, following "Senorita" and "Apparition." 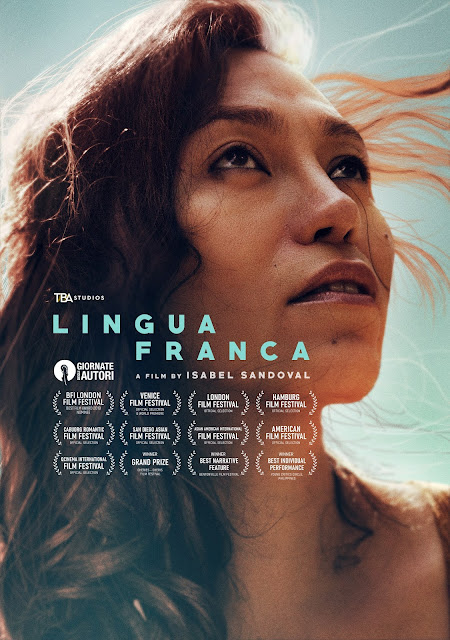 Says Sandoval, "I'm happy that 'Lingua Franca' was picked up by TBA Studios, since I've always admired their strong support for independent films and their total commitment in helping out new filmmakers with a distinct sensibility. I'm looking forward to working with TBA in releasing the film especially here in the Philippines."

“We’re very proud of this new acquisition. 'Lingua Franca' is just our kind of film--a work of originality and vision. Like Isabel, we're looking forward to getting the word out on this film and bringing it out there to its appreciative audiences," chimes Eduardo A. Rocha, TBA Studios' co-CEO/ co-founder (along with Mr. Fernando M. Ortigas).

Major film critics have already given raves to "Lingua Franca," praising the director as well as the performers. Hollywood Reporter called it "groundbreaking" and "worth celebrating," while Screen International tagged it as "a landmark film, a character study with depth and intimacy." David Fear of Rolling Stone called it "an affecting film" and added that "Olivia is played with extraordinary understatement by Isabel Sandoval." Finally, Stephanie Zacharek of Time magazine raved, saying "'Lingua Franca' is a gorgeous and delicate picture, with Sandoval radiating luminous warmth as Olivia."

Creators of some of the Philippines' most acclaimed films in the last five years, TBA Studios is behind such award-winning, commercial successes as "Heneral Luna," "Goyo: Ang Batang Heneral," "I'm Drunk I Love You," and "Write About Love." Two of its most highly-regarded acquisitions include "Sunday Beauty Queen" and "Women of the Weeping River." Impressed with the quality of TBA's film projects, Netflix has bought a good number of TBA titles including "Heneral Luna," "Goyo," "Birdshot," and more recently, "Kung Paano Siya Nawala," "Tayo sa Huling Buwan ng Taon," "Write About Love" and "1-2-3." TBA's launch this year of its VOD (video-on-demand) platform coincided with the March lockdown, and has since grown with more than 250,000 subscribers and still growing. These days, TBA Studios' YouTube (YT) Channel gets anywhere from 2 to 5 million views each month.