- 7:15 PM
Daang Dokyu Lets You Learn from the Masters of Philippine Documentaries for Free
Want to learn documentary filmmaking from Alyx Arumpac, director of the much-acclaimed film Aswang? Or do you want to learn the history of documentary filmmaking in the Philippines from Prof. Nick Deocampo, one of the country’s most prolific and revered historians?
Daang Dokyu, the ongoing festival of Philippine documentaries, offers these classes for free, for everyone via its Facebook and Youtube Channel.
Documentary Filmmaking 101 happens on October 14, 2:00 PM. 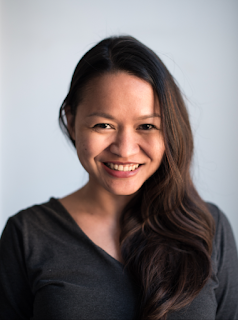 Arumpac will talk about the challenges of making the first documentary film and seeing it develop from a personal idea to a work seen by the wider public. This session will serve as a practical guide to the essential parts of the creative process.
Arumpac said that she plans to focus more on making community documentaries.  She adds "Anyone can make docs. I am thinking of the premise of empowering people; that degrees are not a prerequisite to make a documentary ." \ 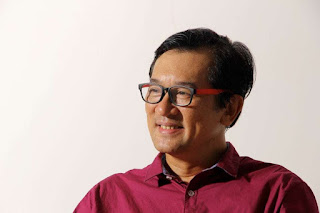 Arumpac is a documentary filmmaker who studied film at the Docnomads Joint Master (Lisbon, Budapest, and Brussels) and the University of the Philippines. She produces current affairs for television in Manila.
Her film Aswang is about the victims of the current administration’s drug war from marginalized communities and is one of Philippines’ most successful online releases this year. It achieved half a million views when it was released online last July, in partnership with Daang Dokyu.  It also won the International Film Critics' FIPRESCI award in Amsterdam in 2019 and the White Goose Award - Grand Prize at the DMZ International Documentary Film Festival
The film is currently streaming for free at DaangDokyu.com/watchnow until October 15. It will come back to Philippine screens in Daang Dokyu’s special Halloween event, #HuwagMatakot.
Historya ng Dokyupelikula is slated on October 21, 4:00 PM.
Prof. Nick Deocampo will discuss the beginnings and movement of documentary filmmaking in the Philippines, through two World Wars, and from revolution to revolution.
Deocampo is both a filmmaker and film historian. He presently teaches as associate professor at the U.P. Film Institute in the University of the Philippines - Diliman. He took up his Master of Arts degree in Cinema Studies in New York University as a Fulbright-Hays scholar and received his Certificate in Film as a French Government scholar in Paris, France. He has made more than 30 documentaries over a span of forty years.
One of his prizewinning works, Oliver (1983), will be streamed by Daang Dokyu from October 16 to 22. The film is about a female impersonator who supports his family by performing in gay bars.
Deocampo will be introduced by one of the festival's partners, Deputy Speaker Loren Legarda.
Legarda, an avid supporter of Philippine documentaries and herself a documentarist, states “I encourage everyone to support the festival to experience various Filipino voices and stories told in the last century to know more about what it means to be Filipino and what this could mean in charting our country’s future.” 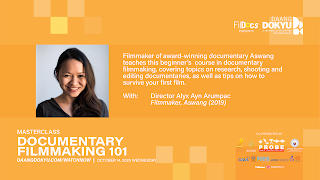 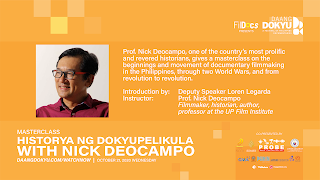 She adds “It’s about time the documentary is given the spotlight. No other platform can give the viewer a near total experience of an issue or a cause in a deeper, more immersive manner.”
Aside from these two, a masterclass composed of veteran journalists Roby Alampay, Ging Reyes, Maria Ressa, John Nery, and Shiela Coronel on October 23, 8:00 PM. They will tackle the current state of Philippine journalism.
GMA Network documentarists Raffy Tima, Atom Araullo, and Kara David will also have a separate masterclass on October 30, 4:00 PM.  They will impart their knowledge in documentary production for television.
More About Daang Dokyu
Daang Dokyu was launched last September 19 to 23 with several titles under its “Martial Law, Never Again” program.  It reopened last October 2 with a section on “Ecology: Ang Lahat ng Bagay ay Magkaugnay.” It is currently streaming its “Nation: Perception is Real, Truth is Not” section until October 15, 2020.
It is touted as the biggest documentary festival in the country, with 45 titles available for viewing for free until November 5, 2020. The festival celebrates the hundred years since we started capturing in film the story of our islands and of the Filipino.
Three more sections are up for streaming, which are “Taboo: Off the Record,” “Localities: Dagat ang Pagitan,” and “Future: Ganito Tayo Ngayon, Paano Sila Bukas.” A new section is introduced every Friday until November 5.
Aside from the films and masterclasses, it also organizes a weekly talkback entitled Reality Check.
It will also feature some of the best documentaries aired on television recommended by festival partners and the leading news and journalism organizations in the country, which are GMA Network, ABS-CBN, Probe Productions, Rappler, Philippine Center for Investigative Journalism (PCIJ) and the National Commission for Culture and the Arts (NCCA).
It also recently launched its “DokBook,” a collection and recollection of histories and stories, as well as views and interviews, centered on the rich landscape of the Philippine documentary in film and television.
The festival is initiated by the Filipino Documentary Society (FilDocs), founded by documentary filmmakers Jewel Maranan, Kara Magsanoc-Alikpala, Baby Ruth Villarama, and Coreen Jimenez.
It is made possible with the support and partnership with the Office of House Deputy Speaker Loren Legarda, National Commission for Culture and the Arts, UP Film Institute and Probe Media Foundation.