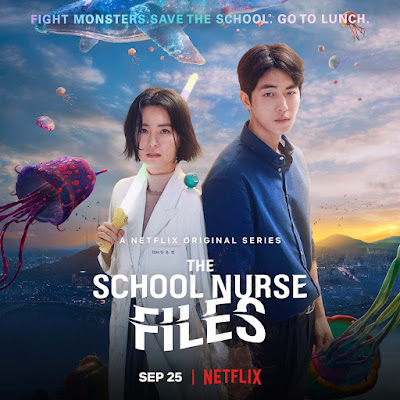 Upcoming Netflix original series The School Nurse Files released a stunning and fascinating new poster that features Ahn Eun-young (Jung Yu-mi) and Hong In-pyo (Nam Joo-hyuk) standing side by side against the backdrop of the sun setting in Seoul. The whale and the jellyfish floating around the two main characters are not real animals, but jellies that are visible only to Ahn Eun-young.

Jellies, created unknowingly by living beings, are the vestiges of their desires. Although they are mostly harmless, these jellies can cause great damage when contaminated. Ahn Eun-young has devoted her life to exorcising them using the special gift of perception she was born with.

The eye-catching image of Ahn Eun-young and Hong In-pyo holding hands is made more vivid by the fairy tale-like background of colorful jellies filling the Seoul sky. Eun-young's appearance is intriguing. Dressed in her school nurse’s gown she holds a rainbow-colored sword and has the serious expression of a woman warrior. The Classical Chinese Literature teacher Hong In-pyo has discovered his new gift of recharging Eun-young with his positive energies.

This series delivers a refreshingly novel story and innovative visual effects. Ahn Eun-young defeats jellies and Hong In-pyo keeps her charged up. Ahn Eun-young, who has led a lonely life fighting the battle unbeknownst to others, and Hong In-pyo, whose disabled leg has made him distance himself from others, come together as two incomplete people who find wholeness in each other. Jung Yu-mi and Nam Joo-hyuk create brilliant on-screen chemistry with their portrayal of these roles.

Acclaimed female creators, writer Chung Se-rang and director Lee Kyoung-mi, have joined forces in creating The School Nurse Files. School Nurse Ahn Eun-young, the novel the series is based on, won the 2013 Changbi Novel Prize and the 2017 Hankook Ilbo Literary Award. Having won such accolades, there is a lot of excitement about Chung Se-rang working on a series based on her popular novel.

Regarding her original and heartwarming novel, Chung Se-rang explained, “I wanted to write a story about good-hearted adults who wish to protect minors without expecting anything in return.” The writer contributed to writing the script alongside director Lee Kyoung-mi. Chung Se-rang noted, “Experts are able to add more plentiful layers in their video interpretation which is wonderful.”

Director Lee Kyoung-mi also explained more about “the story of a female warrior in the making, learning to accept her powers.” She learns to accept herself despite her differences and grows into becoming a hero that eliminates contaminated jellies. Lee Kyoung-mi shared, “I wanted to share some warmth to all of the lonely people everywhere through this new world where imperfect Ahn Eun-young and Hong In-pyo meet.”

Tune in for the unique story that has never been seen before when The School Nurse Files premieres on September 25, only on Netflix.