Believing is everything! "OVER THE MOON" is coming to Netflix Fall 2020 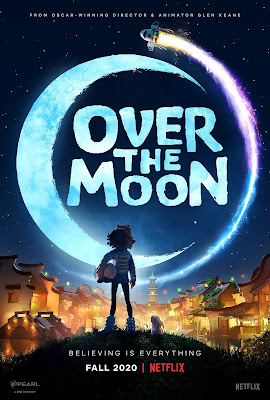 Fueled with determination and a passion for science, a bright young girl builds a rocket ship to the moon to prove the existence of a legendary Moon Goddess. There she ends up on an unexpected quest, and discovers a whimsical land of fantastical creatures. Directed by animation legend Glen Keane, and produced by Gennie Rim and Peilin Chou, Over the Moon is an exhilarating musical adventure about moving forward, embracing the unexpected, and the power of imagination.

About Netflix
Netflix is the world’s leading streaming entertainment service with 183 million paid memberships in over 190 countries enjoying TV series, documentaries and feature films across a wide variety of genres and languages. Members can watch as much as they want, anytime, anywhere, on any internet-connected screen. Members can play, pause and resume watching, all without commercials or commitments.
About Pearl Studio
Pearl Studio is one of the world’s leading creators of animated entertainment for the global family market and has recently completed Abominable, a co-production with DreamWorks Animation, directed by Jill Culton, which was released worldwide through Universal Pictures in September 2019. The studio is also currently producing Over the Moon, an animated musical feature film event directed by legendary animator and Academy Award-winning filmmaker Glen Keane. The film will be distributed theatrically in China by Pearl Studio and worldwide by Netflix in 2020.
Love watching Netflix on mobile? Now at only PHP 149/month, the new Netflix Mobile plan lets you enjoy all our movies and shows on your smartphone or tablet. Download the Netflix app or visit www.netflix.com for more details.