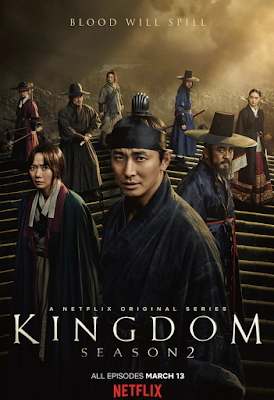 The featurette of Kingdom season 2 has a sweeping storytelling, looking into the journey of Crown Prince Lee Chang and his group in their return to Hanyang. Ju Ji-hoon, who plays Lee Chang says, “Season 2 is full of angst,” hinting that unspeakable desperation awaits. If season 1 was a story about a plague started by hunger, this season is a story greater in scope and depth, addressing the theme of ‘blood’, which is played out through bloodline, kinship, revenge, conflict, conspiracy, and the usurping of power.


Writer Kim Eun-hee says that she wanted to portray “people making choices and striving to overcome their difficulties within the confines of their social class and position.” In building anticipation for the characters, she notes that each of them made the wisest choice they could in the battle against the never-ending aggression of the infected as well as the rampant greed of the Haewon Cho family.


Director Kim Seong-hun, who ended season 1 with an image that shocked fans, launches season 2 with an epic action scene in “an unexpected, tsunami-like onslaught of the undead” that viewers can’t take their eyes off of. The battle of Unpo wetland that opens season 2, and the battle scene at the royal palace in Hanyang, are spectacular visual representations of the hero Chang and his determination to fight for what’s right.


Director Park In-je, who joined the production to head episodes 2 through 6, explained his approach to continuing the work of Director Kim Seong-hun by clearly portraying Chang’s maturing process in becoming “a true king — a king by and for the people.”


Check out the featurette below:
Labels: Kingdom Netflix Press Release