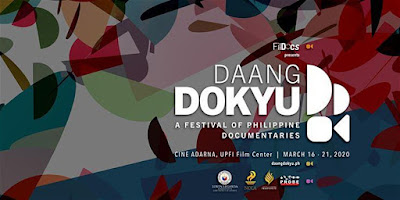 The campaign on climate change has only recently gained attention in the Philippines. Daang Dokyu, a forthcoming festival on Philippine documentaries, aims to augment this timely and important collective effort through a showcase of works about the country’s environment in its first-day section "Ang Lahat ng Bagay Magkaugnay."


By presenting documentaries that show the inter-relatedness of man's actions impinging on nature, "Ang Lahat ng Bagay Magkaugnay" reveals how the human drive for financial rewards and modern ease correlates to the degradation of respect for communities that have long depended on nature for material and spiritual subsistence.


The six-day festival will be from March 16 to 21, 2020, at Cine Adarna, UPFI Film Center, at the University of the Philippines. To be featured are works by Filipino documentarists, as well as titles from different countries that were made as early as the 1900s. Moreover, it will premiere some of the latest and much-anticipated documentaries to be released this year.


The curated section on the first day includes Native Life in the Philippines, a 1914 archival film by Dean Worcester containing ethnographic documentation of Philippine tribes used to secure the United States colonial government support; Sabangan, a 1983 film from Asia Visions on the Remontado tribe in the Sierra Madre forest struggling against a dam project by the Marcoses; The War We Were Not Taught About, a 1994 film by Jin Takaiwa tracing the destructive effects of the Philippine-Japanese war that endured decades after as environmental degradation brought by neocolonial industrialization; Bakit Dilaw ang Gitna ng Bahaghari by Kidlat Tahimik, a 1994 film that was shot over a decade; and Pagbabalik Sa Tribo by Howie Severino, a 1999 documentation of filmmaker Auraeus Solito seeking of his tribal Palawan roots.


The first day also features films from the 2000s onwards. These are Tungkung Langit by Kiri Dalena, a 2013 film that tells the story of children Apolonio, 12, and Analou, 9, who lost their parents and three siblings to Typhoon Sendong; Balud, a 2014 film by Francis Solajes about Typhoon Haiyan that wiped out the director’s hometown in November 2013; Siyanan, a 2017 essay film by Summer Bastian that uses myth to tell about the disappearing traditions of the indigenous peoples of Bontoc, Mountain Province; and Dam Nation, a 2019 film by Grace Simbulan documenting the struggle of the Dumagat tribe of Quezon Province and Tanay, Rizal, against the building of Kaliwa-Kanan-Laiban Dam of the Duterte administration.


Making its Philippine premiere in Daang Dokyu is a short film by Joanna Arong entitled To Calm The Pig Inside, a narrative about Supertyphoon Yolanda in the Philippines and its devastating impact in Tacloban.


These films are grouped into different programs that will be introduced by notable individuals in the documentary industry. The programs under the section on ecology will be introduced by Nick Deocampo, a multi-awarded filmmaker, film historian, and film literacy advocate; Adjani Arumpac, an award-winning documentarist and film professor; and National Artist for Film Kidlat Tahimik.


Daang Dokyu will also host post-screening discussions through its “Reality Check” sessions. These sessions offer the documentary way or “docu way”, allowing viewers to glean through various social issues with the guidance of the mediation of curated documentaries.


The Reality Check session for the first day will have speakers moderated by renowned TV host Boy Abunda. These discussions are free to the general public.


Other themes covered by the festival include politics in the past and present; state of the Philippine regions; mental health and gender identity issues; as well as social media and the internet.