Unlocking the Magic: A Guide to Locke & Key’s 12 Enchanted Keys 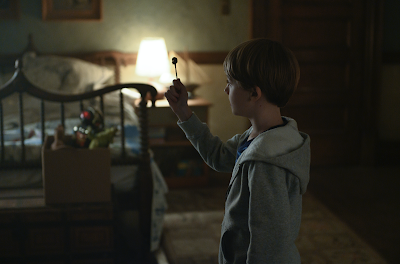 If you had magical keys, would you use them to do good, get back at someone, or do something impossible that’s possibly life-threatening? Locke & Key, the long-awaited television adaptation of the best-selling comic book series by Joe Hill and Gabriel Rodriguez for IDW comics, explores the moral dilemma about the use of power for good versus evil.


After their father is murdered under mysterious circumstances, the three Locke siblings and their mother move into their ancestral home, Keyhouse, which they discover is full of magical keys that may be connected to their father’s death. As the Locke children explore the different keys and their unique powers, a mysterious demon awakens — and will stop at nothing to steal them. From Carlton Cuse (Lost, Bates Motel) and Meredith Averill (The Haunting of Hill House), Locke & Key is a coming-of-age mystery about love, loss, and the unshakable bonds that define family.


Throughout Locke & Key, the siblings discover new keys hidden in Keyhouse, each imbued with a unique magical power that bends the confines of reality. When creating the keys in the comics, Hill and Rodriguez were careful to make sure each new key would ask a question and add to the narrative. The producers mirrored that logic. “The keys represent one of the most important themes for our show: Identity. Each of the keys has the power to change you or your world in some way,” Meredith said.


Here’s a guide to Locke & Key’s 12 enchanted keys. If you had the power to use each one of them, would you? More importantly, should you?


The Head Key enables the holder to create a door into anyone’s mind. They can walk into their own brain and see its inner workings — and bring others along, too. This key also allows the holder to extract things from the mind (memories or emotions) and insert things (books or false memories).


When used to open the correct door inside Keyhouse, the Ghost Key allows whoever steps through it to leave their body and travel as a ghost around the Keyhouse grounds. Their soul rejoins their body when they reenter Keyhouse through the same door.


The Matchstick Key can immediately ignite any surface it touches.


Brand new to the Locke & Key universe, the Mirror Key opens a doorway to the prison of the self. When used in a mirror, the key will show you the mirror realm version of yourself, meant to lure you inside. If you’re not careful, the Mirror Key can trap you and anyone who ventures inside in an inescapable labyrinth of mirrors.


Whoever puts the key in the music box has complete control over a person. The holder can whisper commands to the music box, forcing the target to do anything.


Whoever wields the Plant Key can manipulate, control, and even weaponize plant matter.


When placed in the Crown of Shadows, the Shadow Key can summon creatures from the shadow realm. Whoever wears the Crown controls the shadows.


The Identity Key allows the holder to change their gender and appearance entirely.


The Omega Key is the most mysterious of the keys. It opens the Black Door located deep inside the sea caves near Keyhouse. It unlocks access to another dimension.