Stranger in a Strange Land: “SONIC THE HEDGEHOG” Lands on Earth

In Paramount Pictures’ live-action adventure comedy Sonic the Hedgehog, Sonic is a little ball of super-energy and speed in, as he notes, an extremely handsome package.


Of course with that great power comes great power-hungry villains, and Sonic must make a narrow escape from his faraway planet, with the help of his protector and friend Longclaw and a magical golden ring, to a planet called Earth.  Longclaw’s final words of wisdom to her young charge, “Never stop running,” will always resonate with Sonic.

Sonic makes himself right at home on our planet, living his best life and setting up a comfy and cozy mancave – make that, hedgehog cave – enjoying his favorite comic (“The Flash,” of course) and movie (Speed, duh) in the small town of Green Hills, Montana.  Using his supersonic speed, Sonic remains hidden from his human neighbors because he’s just too much for this world.  Yet, he’s always looking out for the townspeople, while longing for their companionship, especially that of town’s sheriff, Tom (James Marsden), whose affection for morning pastries has led Sonic to call him “Doughnut Lord,” and Tom’s wife, Maddie (Tika Sumpter), aka “Pretzel Lady” (for her impressive yoga practice).

After watching a local baseball game, Sonic takes to the field alone and plays all the positions himself.  It’s an incredible display of super-speed and super-fun, but it leaves Sonic feeling even lonelier, and he works out his feelings in an electrifying and turbo-charged run, which leaves the area without power.  The sudden and widespread outage draws the attention of the military and C.I.A., which enlists the unconventional – i.e. maniacal – mega-genius Dr. Robotnik (Jim Carrey), to track down the source of the energy surge.

For Jim Carrey, Robotnik provided the opportunity to return to his legendary film comedy roots and, he says, “hit that absurd energy that people really love – and the vibe of films like Ace Ventura: Private Eye, The Mask, and Dumb and Dumber.  Playing Robotnik, I just let the floodgates open!”

Meanwhile, Sonic and Tom finally cross paths after the sheriff finds Sonic rummaging through his shed and accidentally shoots him with a tranquilizer gun.  But it’s not long before Sonic shares his secret with Tom and the two become thick as thieves and embark on a road trip to retrieve Sonic’s magical golden rings, now resting atop San Francisco’s towering Transamerica Building.

Says James Marsden:  “Tom finds meaning, not to mention an epic and unforgettable adventure, in being a friend to this creature.”

Naturally, Robotnik is in hot pursuit, looking to capture Sonic and harness his powers for – what else? – nothing less than control of the entire world … and universe. 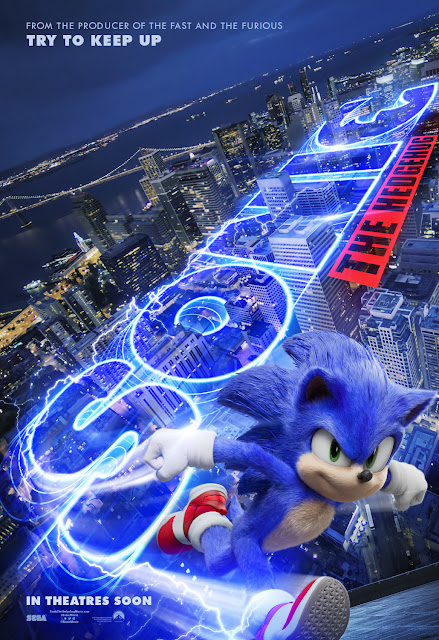