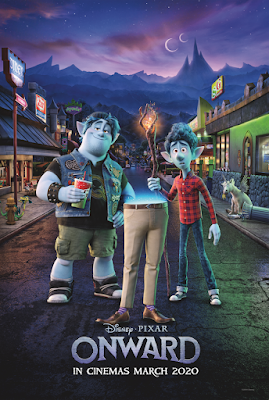 
Onward showcases a heart-warming film with the classic Disney-Pixar formula which always made them successful. It has an original story with an adorable set of unique characters who have a potential for their own story arc. We love that it has its own universe to revolve in and has an inventive story which proposes a magical fantasy world that develops through time. Yes, it may have a similar historical background to the real world, but it has elves, trolls, fairies, unicorns, dragons and other magical creatures all living in the same environment and uses technology. 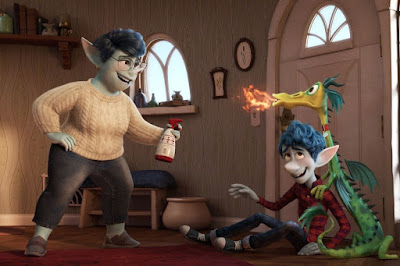 Imagine a you’re living in a magical world of mythical individuals who doesn’t know magic. The film sets in a suburban life of two elven brothers Ian (Tom Holland) and Barley Lightfoot (Chris Pratt), just two teenage boys living their regular life with regards to the fantasy standards. They pose a dynamic play with each other creating a realistic atmosphere that seems relatable to the audience accompanied by an animation that is pleasing to the eyes. The houses and furniture are common to us but with a subtle hint of the fantasy world. The backdrop of every scene does correspond well with the mood of the characters. Noticeably well, and detailed but doesn’t overwhelms the actions of our beloved protagonists.

It also has a nice fade and smooth edges that do highlight the movement of our heroes. With this, the energy and thrill of the story itself are obvious, which has nice contrast of the subtle backdrop to the moving elements which creates an amazing interplay. There are also a lot of moments that are emotional and touching as the film gives a natural growth for feelings. It slowly captures the hearts of the viewers while taking our minds off the real world and let us experience an immersive place that feels like you’re also a part of the film.

The narrative with a strong story structure gives a foundation for the film to revolve around. The good use of color, lighting and sounds did set a mood that helps with the delivery of the messages. The entire film is fun and crazy with jokes for the whole family to enjoy. However, there are some rude and too goofy puns for the kids to have. The voice casts were led by Tom Holland and Chris Pratt which we think did a pretty nice job handling the Lightfoot brothers. They made it natural yet overly charismatic in giving life to their respective characters. Chris Pratt issued an older stance for Barley Lightfoot, with a lot of experience in life, which seemed to compliment Pratt’s voice and tone. On the other hand, youthful and naive Holland did portray an introverted school boy who struggles but tries get along with. Supporting roles, Julia Louis-Dreyfus as Laurel Lightfoot and Octavia Spencer as Manticore provided the feminine and emotional support for the leads. Even so, they are dominant in every scene; their expressive characters give an additional energy and life to the story.

Director Dan Scanlon, an experienced director, writer and artist did a fine job in controlling the movie. He sets a story arc for the characters, giving them a unique trait for the audience to fall in love with and get attached easily. He managed to get the love and attention that the characters deserve. Like in his previous works, he knows how to slowly set the love while having a playful yet has that thrilling vibe while adding and subtracting the magic alternately gave a roller coaster ride for the viewers to get hooked throughout. Scanlon also knew when to fill up the gaps by putting a whimsical funny party which adds excitement.

Overall, Onward has an amazing concoction of adventure and magic for the entire family. It is thrilling, exciting, energetic, crazy yet lovable by all means and the best of all it knows when and how to touch our hearts. It has a perfect mix of everything that would capture the kid in you and reminisce your childhood. This is another Disney•Pixar film to remember with a fantastic material and touching message for everyone to appreciate.