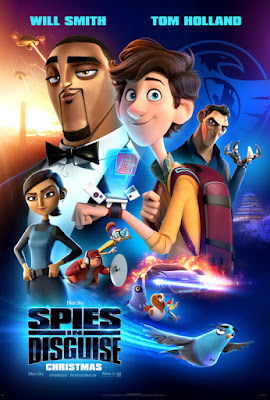 
This new animated feature coming from 20th Century Fox quickly grabbed the audience attention right from the opening minutes. It has a creative material that generates a lot of laughs with its quirky and noticeable characters. Every scene was colorful and humorous with a bit of drama on the side.  It is a perfect movie for a family bonding weekend in cinemas.

The designs were quite simple, but it is easy to remember every single detail that the film sells. It has a lot of interesting characters plus the innovative spy weapons to hype it up a bit. You also got the cute pigeons to back up the characters and create the additional comedy throughout. Plus there are lessons to be learned, like the importance of friendship, which is a solid message for young audiences.

Aside from the enjoyable animation, the film also got a lot of fire power coming from its brilliant voice cast. Will Smith fit super spy Lance Sterling as he easily creates a tone to a great spy who believes that he can do anything by himself. Tom Holland, on the other hand, perfectly suits the voice the intelligent lab genius Walter Beckett. His energy contagious and we still feel his spider sense in him while delivering his lines. You also have an amazing supporting talent behind them with the likes of Karen Gillan, Ben Mendelsohn and DJ Khaled, who all added spice to complete the party.

Overall, Spies in Disguise is an animated film that could easily entertain both kids and adults with its enjoyable spy story, unique characters and admirable voice cast. This is a complete package that will bring joy to everyone and a sure film that is worth the price of admission.