Get Know the Talking Creatures in the Epic Adventure “DOLITTLE”


Universal Pictures presents the new epic adventure Dolittle, the vivid re-imagining of the classic tale of the man who could talk to animals.  When the young Queen Victoria falls gravely ill, the hermetic Dr. Dolittle (Robert Downey,Jr.) is forced to set sail on an epic adventure to a mythical island in search of a cure, regaining his wit and courage as he crosses old adversaries and discovers wondrous creatures.

The doctor is joined on his quest by a raucous coterie of animal friends.  Meet them below! 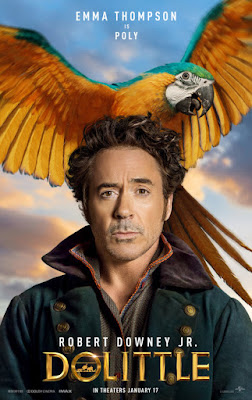 Regal, vain, and ferocious when called for, Poly (Emma Thompson) is Dolittle’s oldest friend, as well as his conscience. Dolittle listens to Poly most closely, even when—as is often the case—she is saying something he doesn’t want to hear. Poly speaks human better than any other parrot, and the gruff matriarch keeps a steady eye on all the family. 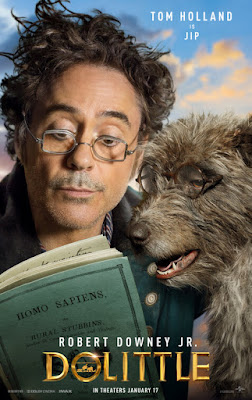 Long-haird lurcher Jip (Tom Holland) is purebred royalty, whose sense of smell is overdeveloped because of his poor eyesight— so much so that he can almost see without his thick glasses. Almost. The trusty canine is tasked to keep watch over Queen Victoria while Dolittle seeks out a cure for what most ails her. Brave, protective and wildly loyal to his mates, Jip is just the guard-dog for the job. 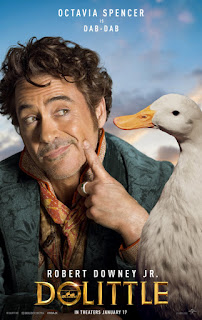 Duck Dab-Dab (Octavia Spencer) is motherly and ditzy, in that she’s a bossy duck who is still—quite simply—a duck. A kind American Pekin, she’s warm and loving, while not always the most-talented nurse. The one duck on Earth with a wooden foot, Dab-Dab is as forgetful as she is intensely faithful to her family 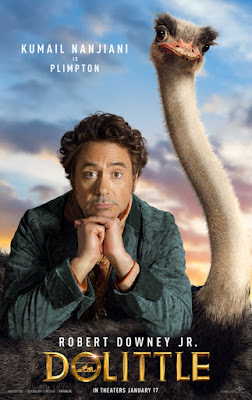 Painfully unaware he can’t fly or swim, Plimpton (Kumain Nanjiani) is a large ostrich who takes issue with serving as Dolittle’s trusty steed—especially once he thinks his rider has gained a bit of weight. You’re more likely than not to find the nervous Plimpton with his head shoved in a planter. 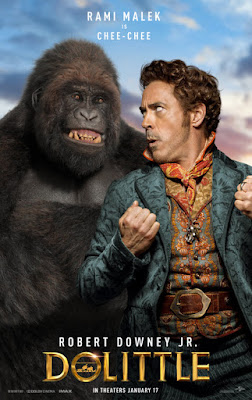 A young man in ape years, the painfully shy Chee-Chee (Rami Malek)—whom Dolittle is teaching confidence—loves games, words, riddles and factoids. Despite being nervous and inseparable from his blanket, the hyperventilating mountain gorilla is playful, clever and very strong. 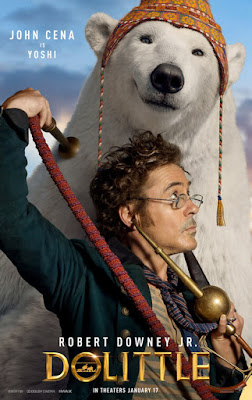 Considering he’s a polar bear, Yoshi (John Cena) hates the cold. The gentle giant likes nothing better than finding a bit of sun or spot by the fire to help his poor circulation, and he’s that friend you know you can count on. 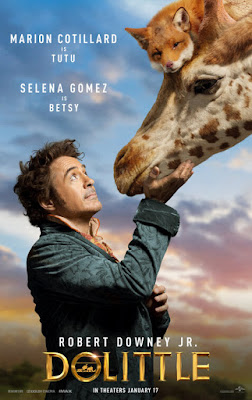 One of the most selfless of all Dolittle’s crew, Betsy (Selena Gomez) often volunteers for tasks and responsibilities. She may seem like a kind, chatty giraffe, but she’s also wildly brave.

The Leader of the Fox Resistance, Tutu (Marion Cotillard) is the embodiment of courage. With ancestors that are the uncatchable desert foxes, Tutu is extraordinarily proud and always pragmatic. When she, Betsy and Poly put their heads together, there is nothing they can’t accomplish. 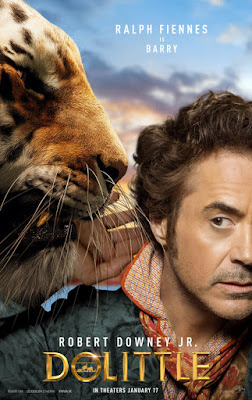 An 800-lb Bengal Tiger with complex mommy issues, the brilliant, migraine-suffering Barry (Ralph Fiennes) was a patient during Dolittle’s first stay at Monteverde. Killer of approximately 872, he is the wryest, drollest and most ironic of all apex predators.

(Watch the film’s trailer at https://youtu.be/ktcLtEkfMFw.)