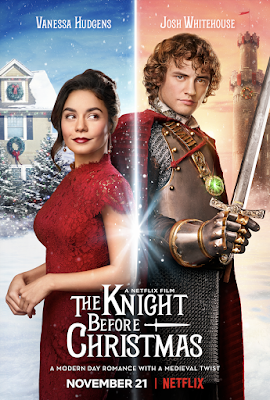 After a magical sorceress transports medieval knight Sir Cole (Josh Whitehouse) to present-day Ohio during the holiday season, he befriends Brooke (Vanessa Hudgens), a clever and kind science teacher who's been disillusioned by love. Brooke helps Sir Cole navigate the modern world and helps him discover how to fulfill his mysterious one true quest — the only act that will return him home. But as he and Brooke grow closer, Sir Cole begins to wonder just how much he wants to return to his old life. Directed by Monika Mitchell (THE CHRISTMAS CONTRACT, ROYAL NEW YEAR’S EVE) and also starring Emmanuelle Chriqui, Isabelle Franca, Ella Kenion, and Jean-Michel Le Gal, THE KNIGHT BEFORE CHRISTMAS is a cozy holiday romance about learning to let yourself believe in magic again.


Netflix is the world'sleading internet entertainment service with 158 million paid memberships in over 190 countries enjoying TV series, documentaries and feature films across a wide variety of genres and languages. Members can watch as much as they want, anytime, anywhere, on any internet-connected screen. Members can play, pause and resume watching, all without commercials or commitments

For more news and updates about the movie please visit netflix.com/TheKnightBeforeChristmas and netflix.com/ItsBeginningToLookALotLikeNetflix
Netflix Press Release The Knight Before Christmas Trailers