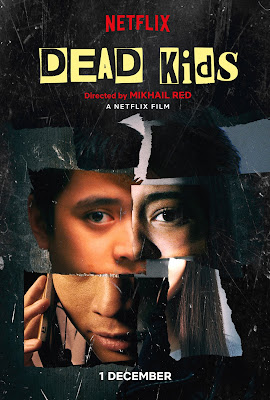 A socially awkward teen bonds with a group of misfits who plot to take out the school's arrogant rich kid -- until their kidnapping scheme turns deadly. Based on true events. Dead Kids is directed by award-winning director, Mikhail Red, who is known for his internationally acclaimed films ‘Birdshot,’ and ‘Eerie,’ -- both of which are also streaming on Netflix.


“I have always wanted to make a film about the complexities of my generation. I wanted to expose the entitlement and insecurities of a generation growing up in a country of extreme social disparity but cleverly package it as pop entertainment. For me, Dead Kids is a story of young lives running wild yet cut short with their potentials unfulfilled. It is a crime story in the age of social media and a bleak vision of the Filipino youth’s psyche. It is a commentary on the youth’s views on masculinity, morality, and vigilante justice paralleled with today’s political climate. It is both a coming-of-age story and a cautionary tale for the builders of our future,” said director Mikhail.


Netflix is the world's leading internet entertainment service with 158 million paid memberships in over 190 countries enjoying TV series, documentaries and feature films across a wide variety of genres and languages. Members can watch as much as they want, anytime, anywhere, on any internet-connected screen. Members can play, pause and resume watching, all without commercials or commitments.
About Globe Studios


Established in 2016, Globe Studios has already made a significant impact in the Philippine film and entertainment industry, having released a plethora of award-winning films from directors like Erik Matti (Kuwaresma), Dan Villegas (All of You, Heaven's Waiting), Lav Diaz (Season of The Devil) and Mikhail Red (Birdshot). In three short years, Globe Studios has become known for world-class entertainment with a Filipino heart.