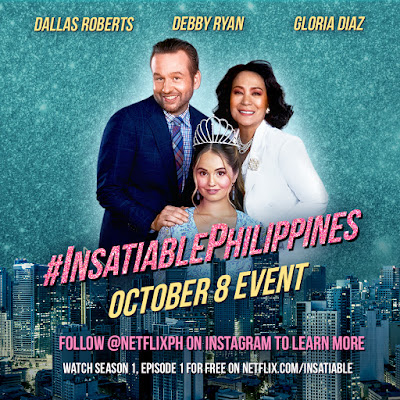 MANILA, PHILIPPINES - OCTOBER 2, 2019 - The Philippines loves Insatiable, and Netflix has a special treat for fans by bringing the series stars to Manila!

Debby Ryan, who plays Patty Bladell, and Dallas Roberts, who plays pageant coach Bob Armstrong, will be coming to Manila on October 8, 2019. Watch Debby’s message to the Philippines here and the new trailer here.


Pinoy fans can get to see the stars at the #InsatiablePhilippines fan event that will bring together everything fun, exciting, and over-the-top about the show. Rumour has it that there is a pageant involved…


Ready to take control and unleash your inner beauty queen (or king) alongside Debby, Dallas, and Gloria? Fans can check the official Netflix Philippines Instagram page, instagram.com/netflixph to find out how they can be part of the fan event.


If you have not seen Insatiable yet, Netflix is making it even easier to join the fandom. Starting today (October 2), for a limited time, anyone in the Philippines (even non Netflix members) will be able to watch the first episode of Insatiable Season 1 for free, exclusively at www.netflix.com/insatiable (we kindly ask that you please include this link in your coverage).


Note: The free episode can be viewed at www.netflix.com/insatiable on desktop, as well as on Chrome browsers on Android. iPhone/iPad users will be prompted to enter their email address to receive a link through which they can watch the episode on their desktop.


In season two of Insatiable we find Patty dealing with, well, a lot. Her past is haunting her, and her struggle to be “good” is becoming harder and harder each day as she battles her inner demons. And Bob - well - he’s helping her cover up Christian’s murder, but just how far will his loyalties go? Will he continue to allow his romantic relationships, his career ambitions, and his integrity to take a beating, just to help Patty pursue her pageant dreams? And when beauty queens start going missing, who’s to blame? Patty’s rage? Or is there more at play?


Netflix is the world's leading internet entertainment service with over 151 million paid memberships in over 190 countries enjoying TV series, documentaries and feature films across a wide variety of genres and languages. Members can watch as much as they want, anytime, anywhere, on any internet-connected screen. Members can play, pause and resume watching, all without commercials or commitments.
Insatiable Netflix Press Release