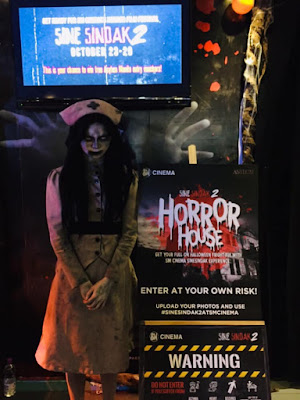 With Halloween just around the corner, it’s time to start planning those horror movie marathons. This year, why not binge on some new Halloween films at SM Cinema as they present the Sine Sindak 2 Horror Film Festival just in time for this spooky season!

Following its successful run last year, SM Cinema’s very own Sine Sindak Horror Film Festival is back with five curated movie titles – Dead Sight, Evil’s Curse, Door Lock, The Only Mom and Look Away. Starting October 23 until October 29, be sure to catch these exclusive films before they’re gone!

In Deadsight, a deadly virus spreads across Grey County. A partially blind man and a pregnant officer work together to escape their town through swarms of the living dead.

A holiday romance gone wrong, Evil’s Curse is the story of a young backpacker who meets the girl of his dreams. The woman, however, starts suffering from strange and terrifying blackouts. In their search for a cure, the couple becomes the unwitting playthings of a vengeful and horrific entity.

Doorlock tells the story of Kyung-Min, a woman living on her own, who one night hears someone trying to unlock her door and finds it wide open. When the police fail to help the frightened woman, Kyung-Min investigates on her own and discovers unknown fingerprints.

In The Only Mom, a family moves into a colonial-style house filled with old photographs to raise their autistic daughter. They soon discover a spirit trapped inside one of the photos and their life takes a turn for the worse.

An alienated high school student in Look Away suddenly switches places with her sinister mirror image. 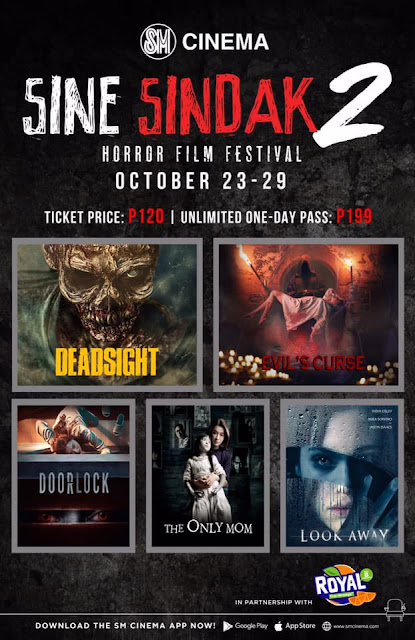 Of course, Halloween will not be complete without a trip to a haunted house. To level up the Halloween experience, SM Cinema is also giving moviegoers the Sine Sindak Horror House, which you can visit in SM Megamall from October 19 to November 3 for a chilling adventure with your family and friends!

You can get the Sine Sindak 2 unlimited all-day pass for only Php 199 or watch a single movie for Php 120 per ticket. To wrap up the complete Halloween package­, SM Cinema is giving moviegoers a chance to win tickets to Asylum Manila. All you have to do is take a photo of the giant word search in select SM Cinema branches and find all ten (10) Philippine mythical creatures. Post the photo on Facebook with your answers in the caption and use the hashtag #SineSindak2atSMCinema. The promo is valid in the following SM Cinema branches: SM North EDSA, SM Megamall, SM Mall of Asia, SM Fairview, SM Manila, SM San Lazaro, SM Sta. Mesa, SM Marikina, SM Southmall and SM Aura.

Catch the Sine Sindak 2 Horror Film Festival from October 23 to 29 in all SM Cinema branches nationwide. Book your tickets through the website, www.smcinema.com or download the SM Cinema mobile app.  You may also follow /SMCinema on Facebook and @SM_Cinema on Instagram for updates! Satisfy your cavings at Snack Time, the official food concessionaire of SM Cinema, which offers a wide array of snack like popcorn, hotdogs and burgers to complement your movie watching experience. Follow /SnackTimeOfficial on Facebook for more information.