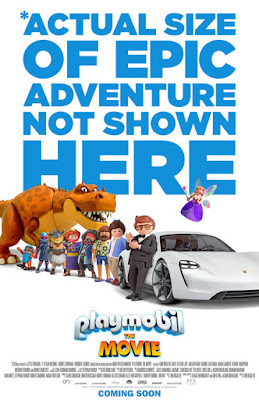 
The Lego movie franchise finally gets a decent competition with the arrival of Playmobil the movie. It pretty much has the same formula, style and charisma but Playmobil has a different approach to the material with a much lighter story line to amuse and entertain the audience, especially the kids.

Yes, it might be pretty difficult to topple the same lego success with four movie installments already, but Playmobil did the right thing in creating its own mini universe and introducing a lot lively and colorful characters along the way. They are also voiced by outstanding talents that you might not recognize at all. You have a consistent Daniel Radcliffe as Rex Dasher which managed to come up with decent laughs every time his character enters a scene. You also got Adam Lambert and Meghan Trainor on the side providing as the spark plugs in some of the song numbers. Anya Taylor-Joy, Gabriel Bateman and Jim Gaffigan powered the main characters with dynamic energy to sustain the positive momentum throughout.

As for the animation, everything was spectacular. The designs were pretty neat and adorable, especially when it comes to the animal designs that came out cute. We also loved the different scenery as it feels like an adventurous trail filled with a lot of surprises in each place.

Overall, Playmobil The Movie has the right amount of entertainment factor not only for the kids but also to keep the grown-ups amused at times. We love the first installment, and we don't mind waiting for the sequel.