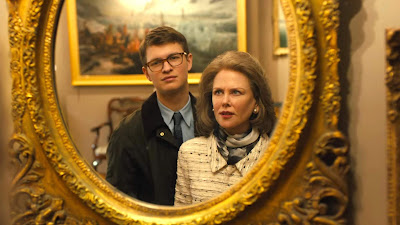 In “The Goldfinch,” after a tragedy that leaves him practically an orphan, young Theo (Oakes Fegley) can’t go home.  When the social workers ask him if there is anyone who could help, the only name he can think to give them is Mrs. Barbour, the mother of his school chum, Andy.

The filmmakers were thrilled when Nicole Kidman accepted the role.  The actress reveals it was due in no small part to the director.  “I saw ‘Brooklyn’ and very much wanted to work with John Crowley, so that was perhaps the biggest draw for me.  And then I read the script and the book and said I’d love to be involved.”

“What else is there to say about Nicole?” Crowley marvels.  “Apart from being a delightful human being and an incredibly warm presence on the set, she brought so much to the role.  From take to take, she was always willing to do more to develop the core idea of each scene.  I cannot imagine another actor who could have inhabited this character so perfectly.  It really was a master class.”

Co-star Ansel Elgort (who plays the adult Theo) agrees.  “Acting with Nicole, I was pinching myself.  I was just in awe watching her.  She is so creative and so emotionally available with a real rawness and groundedness to her work.  We were only in a few scenes together, but it was spectacular.” 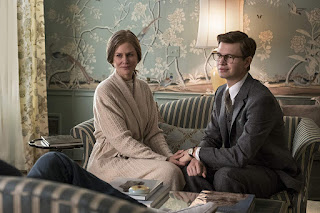 Considering her character, Kidman says, “One thing I found quite intriguing about Mrs. Barbour is that she doesn't initially respond to Theo.  She welcomes him into her home because it’s the right thing to do, but at the same time she’s very held back.  There is a stoicism to her and a kind of quietness.  Her ability to open up to this child is limited, and I think that’s an interesting way to start their relationship.”

Crowley relates, “It would have been easy to just portray her as being cold and haughty, but that’s not what Nicole did.  We wanted to suggest degrees of emotion behind her brittle façade, and you actually do get the sense of a whole interior life beneath the surface, particularly in the earlier time frame.” 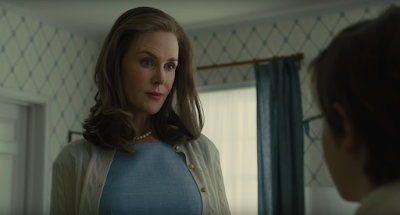 Years later, when an older Theo is reunited with Mrs. Barbour, the difference is palpable.  “It’s almost as if she can’t contain her emotions,” Crowley concludes.  “Mrs. Barbour sees in Theo’s return the possibility of redeeming something that may well be irredeemable.  She thinks of him as the surrogate child she never got to incorporate into her family unit, which looked perfect from the outside but was about to come apart.”

A beautifully wrought coming-of-age story, intimate in its emotion and sweeping in its design, “The Goldfinch” is the film adaptation of Donna Tartt’s globally acclaimed and beloved bestseller of the same name.  The novel, which won the 2014 Pulitzer Prize for Fiction and the Andrew Carnegie Medal for Excellence in Fiction, spent more than 30 weeks on The New York Times Best Sellers list.

The last time 13-year-old Theo Decker saw his mother, she was gliding away from him into another gallery of the Metropolitan Museum of Art.  Seconds later, a terrorist bomb exploded destroying priceless pieces of art…and shattering Theo’s life forever.  The tragedy changes the course of his life, sending him on a stirring odyssey of grief and guilt, reinvention and redemption, friendship and even love.

Throughout the turbulent years, as he grows into adulthood, Theo secretly clings to a single, precious object—his one tangible connection to the mother he lost on that terrible day—a priceless painting of a tiny bird chained to its perch.  The Goldfinch.

In Philippine cinemas September 25, “The Goldfinch” is distributed in the Philippines by Warner Bros. Pictures, a WarnerMedia Company.  Use the hashtag #TheGoldfinch

Watch the latest film spot below: