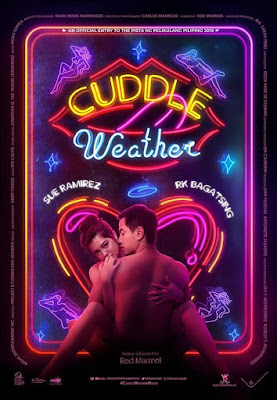 
Last night, was the special advance screening of Cuddle Weather at SM Megamall, and boy; we were surprised with the total outcome of the film. Yes, this might be one of the most popular entries for this year's Pista ng Pelikulang Pilipino because of its one-of-a-kind theme, oozing poster and the very intriguing trailer. However, you still have some doubts in your mind if Sue Ramirez and RK Bagatsing pairing would work.

Well, all the doubts were erased permanently after watching the film as Sue and RK delivered a tantalizing chemistry throughout the film. It feels like the two are meant for each other as their performance came out naturally, and they were just right on cue in every scene. This is the best Sue Ramirez film so far and probably the most memorable character for me this year. She was killing every scene, and we simply can't help but admire her dedication and effort, she gave here. RK Bagatsing, on the other hand, shows that he has the potential and proved that he belongs in the big league. He connected well with his leading lady and came up with an outstanding portrayal for the perky Ram.

Director Rod Marmol made sure that his stars are utilized well and could answer back a sensitive but eccentric material he brought life on the big screen. It is evident that the script was well-written and filled with humor throughout. We love the story and how everything was played even there were a few issues on the rushed third part. There were also a lot of fun moments and lines that you could definitely use as quotable quotes for your social media statuses.

Overall, Cuddle Weather will surely set the screen on fire not only with the steamy scenes but also with the instant palpable connection between Sue and RK. If you are a fan of rom-com films, well this is a must watch for you and your friends.