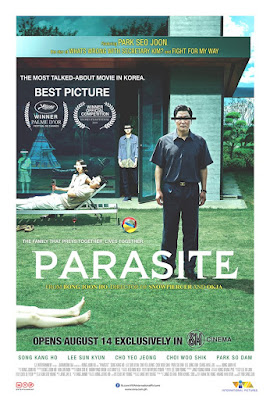 Get ready for a thriller that will get under your skin as SM Cinema exclusively brings Parasite – winner of the 2019 Palme d’Or, the highest prize awarded at the Cannes Film Festival – to Philippine cinemas nationwide.

Easily one of the most recognizable modern-day directors, Bong Joon-ho is known for genre-bending films such as The Host, Mother and Snowpiercer. His latest film Parasite is a black comedy/drama in the mold of a home invasion thriller that offers the audience a darkly funny yet ultimately unsettling glimpse into the lives of two families divided by class.

Parasite follows the Kim family who live in a sub-basement apartment in a low income area of Seoul. Ki-Woo, the Kims’ eldest son, with the help of his sister Ki-Jung, forges a fake diploma and gets the opportunity to work at the hilltop mansion of the very wealthy Park family. However, greed threatens the security of his job, as well as the safety of his own family and the people around him.

Catch Parasite starting August 14, only at SM Cinema branches nationwide. Book your tickets through the website, www.smcinema.com or download the SM Cinema mobile app. You may also follow /SMCinema on Facebook and @SM_Cinema on Instagram for updates. Satisfy your cravings at Snack Time, the official food concessionaire of SM Cinema, which offers a wide array of snacks like popcorn, hotdogs and burgers to complement your movie watching experience. Follow /SnackTimeOfficial on Facebook for more information.
Parasite Press Release Viva International Pictures