How far would you go to protect your daughter? And at what cost?

In the sci-fi thriller Freaks, seven-year-old Chloe (played by young actress Lexy Kolker) lives her life forbidden by her father (played by Into The Wild’s Emile Hirsch) to leave their house. Her father claims there is danger lurking outside and he is only protecting her from harm.

But something does not feel right. And the presence of an ice cream salesman (played by Academy Award for Best Actor nominee Bruce Dern) with his alluring Mr. Snowcone ice cream truck in front of their house makes Chloe believe that her father may not be telling her the truth. Mr. Snowcone explains to the Chloe to the existence of “Freaks” — people who are classified as dangerous and illegal.

It also boasts of an impressive cast. Besides Hirsch and Dern, Freaks also stars Grace Park (TV’s Battlestar Galactica and Hawaii Five-0) and Amanda Crew (HBO’s Silicon Valley). The Hollywood Reporter praises the movie’s “tight-knit ensemble” and singles out young Kolker’s performance as the “feisty little girl determined to protect her family.” “Her semi-improvised performance couldn’t be any more authentic and she’s well matched with Hirsch, drawing on his own parental experience, as her conflicted and overprotective father. The ever-versatile Dern delivers a slyly subversive turn as Mr. Snowcone, whose hidden agenda involves much more than frozen treats,” it adds.

All of these achievements made io9 declare that Freaks is a “wonderful, exciting film.” “Stein and Lipovsky stuff Freaks with limitless imagination, finding ways to execute their loftier ambitions. It’s a film filled with complex, robust ideas that not only have a unique twist to them but a realistic grounding that makes them more relatable and impactful.”

The movie, to be released in the United States by WellGo USA, is written and directed by Zach Lipovsky and Adam Stein. 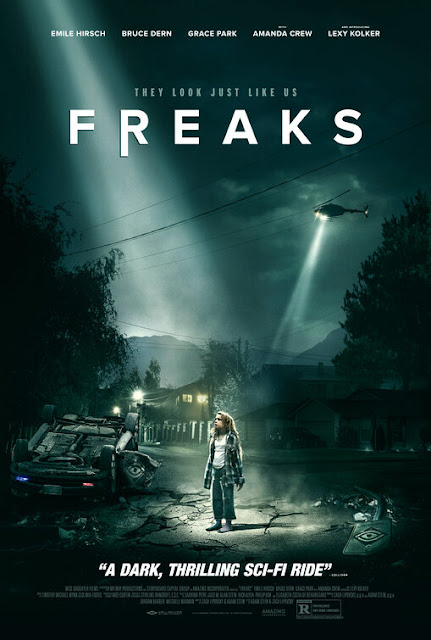 “Freaks” is distributed locally by TBA Studios. It will open in Philippines theaters on August 23, 2019.