SM Cinema is going full throttle with the release of Fast and Furious Hobbs and Shaw.


The first spin-off movie of the successful adrenaline-induced franchise, Fast and Furious Hobbs and Shaw is set to hit SM Cinemas on July 31.
From the box office movie franchise that has amassed $5 billion worldwide, Fast & Furious is adding yet another angle to the always-evolving storyline with Luke Hobbs (The Rock) and Deckard Shaw’s (Jason Statham) unlikely partnership. 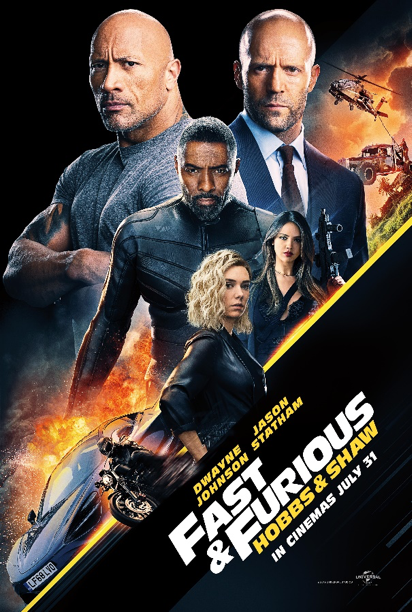 Hobbs and Shaw is expected to be more inclined to be an action-packed movie while staying true to the identity of Fast and Furious that is linked to cool cars going on full speed. With car chases involving a sweet ride in the form of a McLaren 720s, gravity-defying stunts from 120 global stunt performers, fist fights and witty banters from The Rock’s Hobbs and Jason Statham’s Shaw, the movie revs up to be another Fast and Furious movie that’s going to be hard to miss out on.

The spin-off follows hulking lawman Luke Hobbs, a loyal agent of America’s Diplomatic Security Service, and lawless outcast Deckard Shaw, a former British military elite operative who are forced to work together to take on cyber-genetically enhanced anarchist Brixton Lore (Idris Elba). Despite their long-standing rivalry since the first face-off in 2015’s Fast & Furious 7, these two sworn enemies will have to partner up to bring down the MI6 agent gone rogue.

Get the full movie experience of this high-octane film by watching it in SM Cinema’s IMAX theaters nationwide.

Fast & Furious: Hobbs & Shaw arrives at all SM Cinema branches nationwide on July 31. Book your tickets through the website, www.smcinema.com or download the SM Cinema mobile app. You may also follow /SMCinema on Facebook and @SM_Cinema on Instagram for updates. Satisfy your cravings at Snack Time, the official food concessionaire of SM Cinema, which offers a wide array of snacks like popcorn, hotdogs and burgers to complement your movie watching experience. Follow /SnackTimeOfficial on Facebook for more information.
###