Attention ARMYs! SM Cinema is set to give you a peek into the world of massively popular K-pop group, BTS with the latest full feature film entitled Bring the Soul: The Movie.

The movie which will be shown exclusively at SM Cinemas beginning August 7 follows the K-Pop band’s record-breaking Burn the Stage: The Movie and their concert film Love Yourself in Seoul which were released in 2018.

Bring the Soul: The Movie invites fans to follow their journey from the stage to the big screen, witnessing spectacular concert performances to intimate moments off the stage while following the group’s 2018 Love Yourself tour in Europe where they performed in London, Berlin, Paris and Amsterdam.

Catch Bring the Soul: The Movie exclusively at SM Cinema! Advance tickets are now on sale at all SM Cinema branches. This is a movie you don’t want to miss! 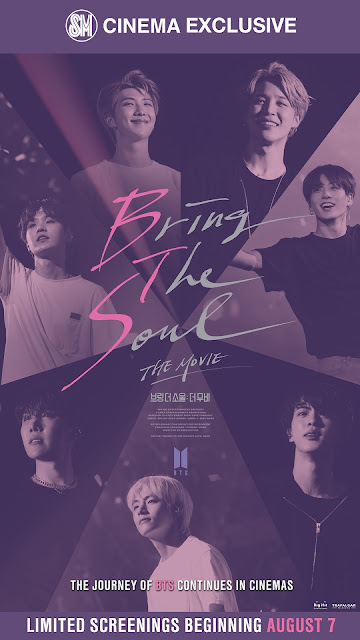 Catch Bring the Soul: The Movie starting August 7 at any of SM Cinema’s 64 branches nationwide. Book your tickets through www.smcinema.com or download the SM Cinema mobile app.  You may also follow /SMCinema on Facebook and @SM_Cinema on Instagram for updates! Satisfy your cavings at Snack Time, the official food concessionaire of SM Cinema, which offers a wide array of snack like popcorn, hotdogs and burgers to complement your movie watching experience. Follow /SnackTimeOfficial on Facebook for more information.