McKenna Grace `Comes Home' to a Terrifying Night with “ANNABELLE”

While the film’s focus is Annabelle and the many other sinister artifacts, and the havoc they wreak together, the Warrens are away during that terrifying night, so it’s their daughter, her babysitter and a friend who must do whatever they can to survive.  And though she hasn’t really told anyone up till now, young Judy Warren is beginning to suspect she might be a little more like her parents than they know.

Judy is played by Mckenna Grace, who says, “My character has powers kind of like her mom; she can see visions, and I think she is a little insecure about it, because it’s very frightening, seeing all these images in her head.  Or maybe they’re not just in her head.”

She is also dealing with being a little ostracized at school as the community is just now getting a sense of what her parents do via their work being written up in the local newspapers.  “She feels a bit like an outcast, because kids at school tease her or don’t want to be her friend.”

Grace herself is very involved at school and, in fact, she says, “I found out I got the role while I was at cheerleading practice and I had to sit out for a minute.  I knew it was going to be challenging because there’s a lot of crying and screaming…basically the whole movie.  But I was so excited!”

Part of her enthusiasm stemmed from being a huge fan of the genre herself.  “My dad and I like to watch horror movies together on weekends, and I just think that they’re really good and James Wan is a genius,” she states.  “I really like the adrenaline.  Beforehand, you’re like, ‘Oh, this is going to be so scary, I’m so excited but I’m scared.’  And then afterwards you can laugh and think, ‘Wow, that was crazy, I want to watch it again!’”

As a big fan of the “Conjuring” films in particular, Grace was thrilled to be working with Vera Farmiga and Patrick Wilson, and they were extremely impressed with her.  “She’s a wonderful actress,” the former says.  “Just a fantastic human being, too.  I don’t think I’ve ever met a kid with better manners than Mckenna, and I find her emotional generosity remarkable.”

“It always amazes me when you come across that fine balance of being seasoned enough to understand how a set works—each take, the actors, directors and so on—and still able to be a kid,” says Wilson.  “You can tell Mckenna is having fun and loves acting, but you can give her a note and she goes back and does it; she has real technical prowess.” 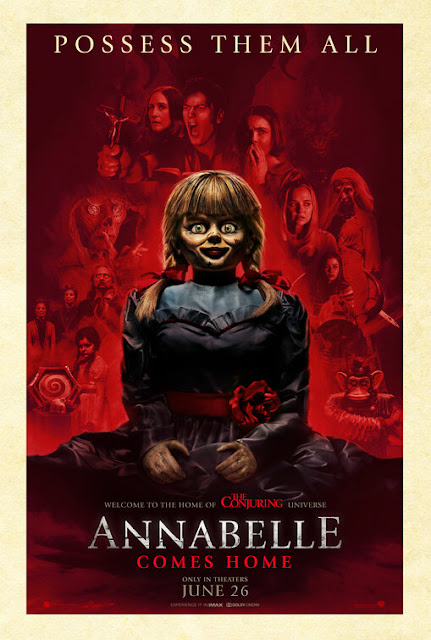 In Philippine cinemas June 26, “Annabelle Comes Home” is distributed in the Philippines by Warner Bros. Pictures, a WarnerMedia Company.  Use the hashtag #AnnabelleComesHome