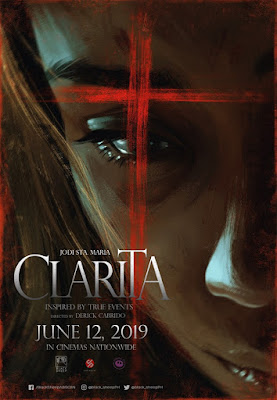 
The trailer alone is pretty disturbing and promising at the same time. What made Clarita more interesting is the fact that it is inspired by a true story about an exorcism incident in the 1950s. Well, after watching it's special preview, Clarita is a decent horror film to look forward to as we don't usually get a local exorcism film on our cinemas.

The 50's setting really added the creepy vibe as a lot of the scenes look pretty raw and believable. The cinematography itself was overwhelming as it was neatly done and the entire film was equipped with an eerie musical score. There are a lot of freaky scenes that will make your heart palpitate and some moments to cover your mouth to avoid you from screaming. We love the prosthetic as it looked realistic and added more flavor to the picture. Not to mention that some of those freaky scenes were surprisingly good as if we were watching an internationally made horror movie.

What really stood out with this film is Jodi Sta Maria. We all know that Jodi is a gifted actress and could do justice to any given role given to her. She is outstanding when it comes to drama, made us cried a lot of times in her films and TV series. But, here in Clarita, we all witnessed a different Jodi Sta. Maria. She elevated her performance into a new level and all we can do is praise the effort she has done with this role. Her supporting casts were also incredibly talented and gave out an equally strong act with their corresponding characters.

Ricky Davao and Arron Villaflor brought their A-game as the priests. They both gave out an excellent performance throughout and sell their role with conviction. Alyssa Muhlach was also great and kinda reminds us of Kristine Hermosa with her beautiful personality. We admire how Director Derick Cabrido managed to use all his stars and gave them the challenge to make everything spine-chilling from start to finish.

Overall,  Clarita is not just an ordinary exorcism film as it has a lot of creepy elements and unique scare techniques throughout. This is the best Jodi Sta. Maria's performance ever and quite frankly, she killed this one. Clarita simply brings the chill factor into a new level, and if you love horror movies, well this is definitely the film you don't want to miss on the big screen.