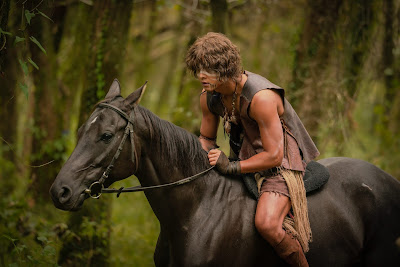 
Eunseom Trailer (30”)
Eunseom played by Song Joong-ki is at a battlefield to protect Wahan Tribe. Charging a horse at his opponents, Eunseom cries out saying, “I’ll save the Wahan people from Arthdal!” He struggles with his own identity, questioning his fate, but he is very determined to protect those whom he grew up with.


Tagon Trailer (30”)
Jang Dong-gun plays Tagon, a son of the powerful Saenyeok Tribe leader. Tagon is strong and smart. He’s the best fighter and best battle strategist Saenyeok Tribe has ever seen. He carries himself with dignity and challenges Eunseom to a duel.

About Arthdal Chronicles
Arthdal Chronicles is a Korean epic fantasy drama, depicting the birth of civilization and nations in ancient times. It is a story of mythical heroes, their struggle, unity and love of people living in a virtual land called Arth. The storyline of Arthdal Chronicles is centered around the ancient city of Arthdal, established on Arth. Eunseom is a character who relentlessly fights to protect his own tribe. Eunseom may appear innocent-looking, but his protective instincts are quite strong that he does not hesitate to be aggressive when attacks are imminent. Tagon, a son of Sanung who is the leader of Saenyeok Tribe, is a character who is very charismatic and most talented, yet overwhelmingly dangerous as he buries his feelings so deeply that no one knows when he will explode with anger and rage. Alongside Eunseom and Tagon are Tanya and Taealha. Tanya is the successor of Wahan Tribe clan mother, who realizes her destiny to lead and protect her own people against other powerful tribes. Taealha is the most beautiful lady in Arthdal, and has the strongest desire for power.

About Netflix
Netflix is the world's leading Internet entertainment service with 148 million paid memberships in over 190 countries enjoying TV series, documentaries and feature films across a wide variety of genres and languages. Members can watch as much as they want, anytime, anywhere, on any internet-connected screen. Members can play, pause and resume watching, all without commercials or commitments.