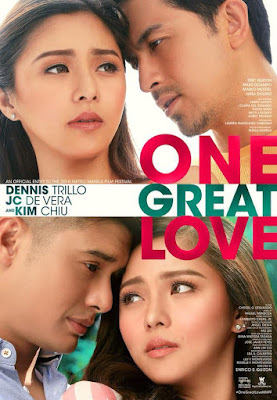 
One Great Love is all about Zyra Paez ( Kim Chiu) who finds herself broken in the hands of Carl (JC de Vera). Years have passed, and she is still coping with that heartbreak. However, she soon decided to give another chance to that same man and hopes for a fresh new start. With her best friend Ian (Dennis Trillo) on her side to support her with her decisions, Zyra wishes that she could finally end up with the person that can define the meaning of one great love.

The film started a bit slow and was taking that same familiar route that we've seen a hundred times before. However, when it suddenly takes a bold turn that may be risky at some point; it managed to run away with an effective result. It has that compelling material that could be relatable to many and could give the viewers a reason to engage on what is happening in the story.

It also has some life lessons that you could apply in real-life. Sometimes you simply can't overlook what the brain is telling you to do what is right, because your heart won't let you. There are a lot of things you can get if you absorb the message of the film, and what consequences it could create when you made a terrible decision. You should also learn on how to move on with the past as Zyra always says, "move on tanga." 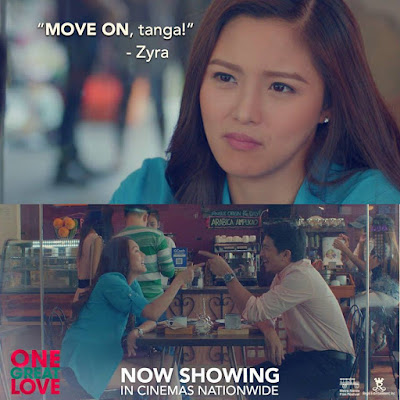 Director Eric Quizon made sure that his cast can answer back to his challenge and make this film more interesting to everyone. Hands down to the remarkable performance of Kim Chiu as she instantly became the highlight of this film.  For me, it is a torn between her and Alex Gonzaga to take home the Best Actress Award later this night. This is arguably her best performance yet, as she really upped her game and provided a stunning act in portraying her character.  She also responded well, with her two leading man and showed her versatility with those daring scenes. Dennis Trillo and JC de Vera gave their A-game in playing their corresponding roles. Both of them showed an astonishing chemistry with Kim and definitely left the audience to choose sides.

Overall, One Great Love definitely made a statement and delivered a film that can both entertain and touch a lot of hearts this Christmas season. It also has the element of surprise and a magnificent set of stars who showcased their talents in this one-of-a-kind movie.

Lakwatsera Lovers rates it 8 out 10 stars