In both the original Dr. Seuss book, Cindy-Lou Who is a tiny toddler, “no more than two,” whose interaction with a Santa-Claus-disguised Grinch revolves only around questioning him about why Santa is taking their Christmas tree in the middle of the night.
In Universal Pictures and Illumination’s new version of The Grinch, she’s a little older, and she’s on a mission to trap Santa to ask him to help her over-worked, over-tired mother. “We wanted to find a character who was the antitheses of the Grinch,” producer Chris Meledandri says. “Someone who was incredibly helpful and embodied the optimism that childhood allows us to have. She’s a very positive character, but there’s a certain wisdom to her as well. We talked a lot about why her path was going to cross with Santa’s — or the-Grinch-as-Santa — and giving her a sense of mission and intention. Her determination puts these two characters on paths that we know are going to collide.”

That collision ultimately becomes the catalyst for the Grinch’s change (and growth) of heart. “She starts the whole process of the Grinch’s transformation,” says Benedict Cumberbatch who lends his voice as The Grinch. “She’s this very excited girl who kind of represents everything that Christmas should be about: thinking about other people, being generous and kind. And it sorts of melts the Grinch. She’s not thinking about what presents she wants for herself, and that really stuns him. It’s the first piece in the puzzle that helps him discover the real reasons Christmas is being celebrated.”
“Cindy-Lou is the light,” director Scott Mosier says. “She sees the good in everybody, and she wants more than anything to help her mother. She wants nothing for herself. That selflessness, that love, shatters what the Grinch believes to be true about the Whos, Christmas — everything really.”

For the role, the directors cast child actor Cameron Seely, who had played PT Barnum’s daughter Helen in The Greatest Showman. “When you set out to cast a child you have two choices,” Meledandri says. “You either cast a child or you cast somebody much older who’s able to give you a voice that sounds like a child. It’s generally our preference to see if we can cast a child, but you’re dealing with a much greater unknown, and it involves a wide search. So when our team found Cameron, Scott immediately responded to her vocal audition, then spent time working with her. From the minute he started to work with her, he saw her potential, and boy, was he right. She performed like a pro with fifteen years of experience, and she’s not even ten years old.”

About The Grinch
For their eighth fully animated feature, Illumination and Universal Pictures present The Grinch, based on Dr. Seuss’ beloved holiday classic.
The Grinch tells the story of a cynical grump who goes on a mission to steal Christmas, only to have his heart changed by a young girl’s generous holiday spirit.  Funny, heartwarming and visually stunning, it’s a universal story about the spirit of Christmas and the indomitable power of optimism.
Academy Award® nominee Benedict Cumberbatch lends his voice to the infamous Grinch, who lives a solitary life inside a cave on Mt. Crumpet with only his loyal dog, Max, for company.  With a cave rigged with inventions and contraptions for his day-to-day needs, the Grinch only sees his neighbors in Who-ville when he runs out of food.

Each year at Christmas they disrupt his tranquil solitude with their increasingly bigger, brighter and louder celebrations.  When the Whos declare they are going to make Christmas three times bigger this year, the Grinch realizes there is only one way for him to gain some peace and quiet: he must steal Christmas.  To do so, he decides he will pose as Santa Claus on Christmas Eve, even going so far as to trap a lackadaisical misfit reindeer to pull his sleigh.
Meanwhile, down in Who-ville, Cindy-Lou Who - a young girl overflowing with holiday cheer - plots with her gang of friends to trap Santa Claus as he makes his Christmas Eve rounds so that she can thank him for help for her overworked single mother. As Christmas approaches, however, her good-natured scheming threatens to collide with the Grinch’s more nefarious one.  Will Cindy-Lou achieve her goal of finally meeting Santa Claus? Will the Grinch succeed in silencing the Whos’ holiday cheer once and for all?
Find out, Christmas season 2018. 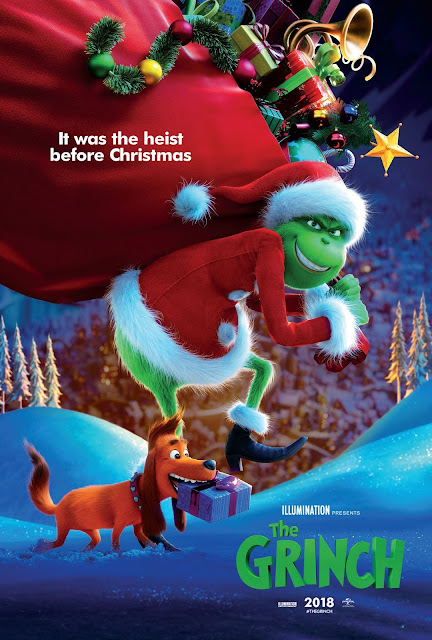