Chilling Adventures of Sabrina: A Midwinter’s Tale launches globally December 14, only on Netflix. 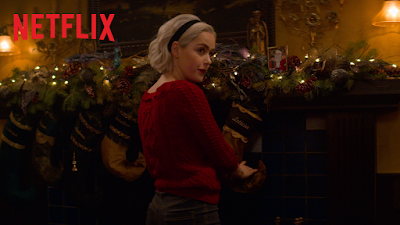 ’Twas the week before Solstice and we’re back in Greendale

To share with you the trailer for the Chilling Adventures of Sabrina: A Midwinter’s Tale.

So summon your familiar and prepare for some holiday magic, But if you don’t light your yule log, the results may be tragic. On December 14th, we invite fans to settle in for a cozy winter's night, A bright solstice to all and to all a good FRIGHT!

About the episode: The Church of Night, like all covens, celebrates the Winter Solstice—the longest night of the year—when families gather around the Yule Fire to sing pagan carols and tell ghost stories. But the holidays are also a time for guests and visitors—both welcome and unwelcome— you never know what might come down the chimney…

About the series: Chilling Adventures of Sabrina imagines the origin and adventures of Sabrina the Teenage Witch as a dark coming-of-age story that traffics in horror, the occult and, of course, witchcraft. Tonally in the vein of Rosemary’s Baby and The Exorcist, this adaptation finds Sabrina wrestling to reconcile her dual nature — half-witch, half-mortal — while standing against the evil forces that threaten her, her family and the daylight world humans inhabit.

About Netflix
Netflix is the world's leading internet entertainment service with 130 million paid memberships in over 190 countries enjoying TV series, documentaries and feature films across a wide variety of genres and languages. Members can watch as much as they want, anytime, anywhere, on any internet-connected screen. Members can play, pause and resume watching, all without commercials or commitments.
Labels: Chilling Adventures of Sabrina Netflix Press Release