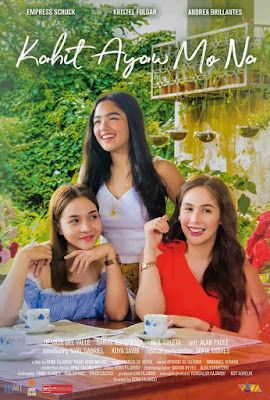 
Last night, the stars of "Kahit Ayaw Mo Na" graced onto the red carpet to greet their fans who are all waiting for its much-anticipated release. Luckily, we are the first ones to watch the film and here are five solid reasons on why you shouldn't miss this on the big screen.

The film is led by three talented and vivacious young stars.

Empress Schuck, Kristel Fulgar and Andrea Brillantes leads this film with such dedication and passion. They all managed to bring weight to their respective characters and easily captivate the audience with their colorful performances. I love how they managed to equally shared the spotlight and prove that they can carry a film behind their backs.

Highlights the beauty of the province of Samar.

It's been a trend that most of the films shown in the cinemas always highlight a specific place that could make the film more fascinating. We don't have any idea how beautiful Samar really is after watching the film last night. It allows the audience a free trip and explore the province by watching some of the scenic views and tourist spots plus experience some of the culture of the locals there.

The title of the movie came from the popular hit Kahit Ayaw Mo Na by This Band, who is making waves through different social media platforms. The song is stuck to my head playing over and over again. It also features great tracks coming from The Juans and Joslin.

Allan Paule is one of those veteran stars whom you can always rely on. He is a versatile star who can easily provide some spark to any film. He proved this in his previous project when he effectively played as a demonic figure in All Souls Night. Here he supplies the comedy relief that the film needs and also answers the call when the film needs to shifts in a much serious tone.

The film handed over a significant message that can be relatable to some of the viewers. Forgiveness, Love and Compassion are all important to every family and these are some of  the key attributed that you can all look forward to in this film.

Synopsis: Three complete strangers find themselves embroiled in a veiled attempt to reunite them with their common past, a situation none of them is crazy about.