Are you ready, internet?
On November 21, video game bad guy Ralph and fellow misfit Vanellope von Schweetz will be back on the big screen in Ralph Breaks the Internet: Wreck-It Ralph 2. In this follow-up to 2012's Wreck-It Ralph, the best pals leave the video arcade behind, venturing into the uncharted, expansive, and  fast-paced world of the internet—which can be both incredibly exciting and overwhelming, depending on who you ask.
Says director Rich Moore, “They’re like a couple of small-town kids who venture into the big city. One falls in love with the city, while the other one can’t wait to go home.”
“Ralph is in love with the life that he has,” adds director Phil Johnston. “But Vanellope is ready for a change—she wants to spread her wings a little. That creates conflict within their friendship, which becomes the heart of the story.”

When the sequel begins, things are going well in the arcade—Ralph (voiced by John C. Reilly) and Vanellope (voiced by Sarah Silverman) happily complete their duties in their games during the day and hang out together in their neighboring arcade games at night. But Vanellope is starting to get bored with the routine. To help his friend out, Ralph tries to make Sugar Rush more exciting, only to start a chain of events that leads to a crucial part of the game being broken. To save the game, Ralph and Vanellope must go to the unfamiliar world of the internet to look for the part in a place called eBay.
Says Pamela Ribon, who wrote the screenplay with Johnston, “Ralph and Vanellope have never heard of the internet, much less eBay, but Litwak has installed a router, so the arcade is actually online for the first time. They decide to take the leap into this unknown world and travel to the internet in order to find the crucial part and save Vanellope’s game.”
A whole new world (wide web)
Exploring the world wide web did not just overwhelm Ralph, it intimidated the filmmakers at the start, too! “It never stopped being intimidating,” shares director of story Jim Reardon with a laugh. “We looked at how we could make the internet relatable on a human level—like how Game Central Station, a.k.a the power strip, mirrored a train station in the first movie. In Ralph Breaks the Internet: Wreck-It Ralph 2, any person who uses the internet has a little avatar version of themselves that does their business for them.”
According to director Moore, the possibilities were both exciting and overwhelming. “We were too naive to realize how overwhelming it would be,” he says. “It was the perfect setting for the story we wanted to tell.”

Producer Clark Spencer agrees. “Nothing else was even pitched,” he says. “Going into the ultra-modern world of the internet was not only a nice contrast to the first film’s nod to the arcade, it offered unlimited possibilities. We could actually personify retail sites, social media, and search engines—we could give people a look inside their computers when they go online.”
A lot of careful planning and ingenious creativity went into building the vast and modern world of the internet into the retro world of Wreck-It Ralph. But despite the scale of the sequel's setting, the heart of the film remains the same: the friendship between Ralph and Vanellope.
“Ralph and Vanellope are imperfect characters,” says Moore. “But we love them because of their flaws. Their friendship is so genuine—the chemistry between them so engaging—that I think we were all anxious to know more about these characters.”
About Ralph Breaks the Internet: Wreck-It Ralph 2
In “Ralph Breaks the Internet,” video-game bad guy Ralph (voice of John C. Reilly) and best friend Vanellope von Schweetz (voice of Sarah Silverman) leave the comforts of Litwak’s arcade in an attempt to save her game, Sugar Rush. Their quest takes them to the vast, uncharted world of the internet where they rely on the citizens of the internet—the Netizens—to help navigate their way. Lending a virtual hand are Yesss (voice of Taraji P. Henson), the head algorithm and the heart and soul of the trend-making site “BuzzzTube,” and Shank (voice of Gal Gadot), a tough-as-nails driver from a gritty online auto-racing game called Slaughter Race, a place Vanellope wholeheartedly embraces—so much so that Ralph worries he may lose the only friend he’s ever had. Directed by Rich Moore (“Zootopia,” “Wreck-It Ralph”) and Phil Johnston (co-writer “Wreck-It Ralph,” “Zootopia,” writer, “Cedar Rapids”), and produced by Clark Spencer (“Zootopia,” “Wreck-It Ralph,” “Bolt,” “Lilo & Stitch”), “Ralph Breaks the Internet” hits Phiippine theaters on Nov. 21, 2018. 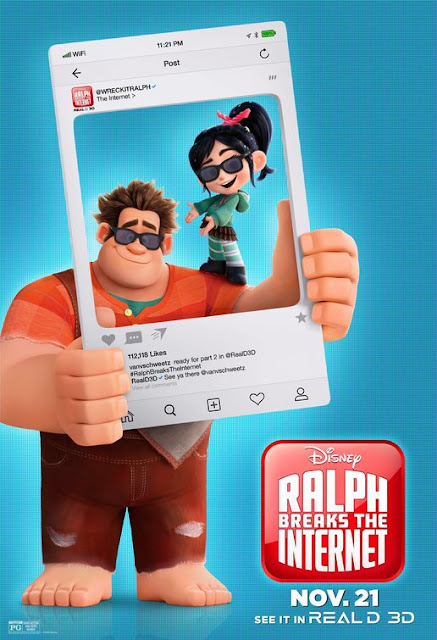