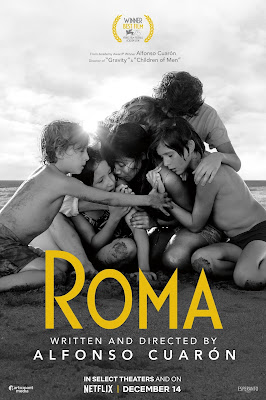 The most personal project to date from Academy Award®-winning director and writer Alfonso Cuarón (Gravity, Children of Men, Y Tu Mama Tambien), ROMA follows Cleo (Yalitza Aparicio), a young domestic worker for a family in the middle-class neighborhood of Roma in Mexico City. Delivering an artful love letter to the women who raised him, Cuarón draws on his own childhood to create a vivid and emotional portrait of domestic strife and social hierarchy amidst political turmoil of the 1970s. Cuarón’s first project since the groundbreaking Gravity in 2013.

ROMA will have exclusive limited theatrical engagements starting November 21 in Los Angeles, New York and Mexico.  Additional engagements in U.S. cities, Toronto and London will begin November 29 with other top U.S. markets and international territories continuing to roll out beginning December 5.  The film will be released globally on Netflix on December 14 with an expanded theatrical release in the U.S. and international markets. In total, the film will be theatrically released in over 30 countries globally with 70mm presentations also being planned during the film’s theatrical release.


About Netflix
Netflix is the world's leading internet entertainment service with 130 million paid memberships in over 190 countries enjoying TV series, documentaries and feature films across a wide variety of genres and languages. Members can watch as much as they want, anytime, anywhere, on any internet-connected screen. Members can play, pause and resume watching, all without commercials or commitments.