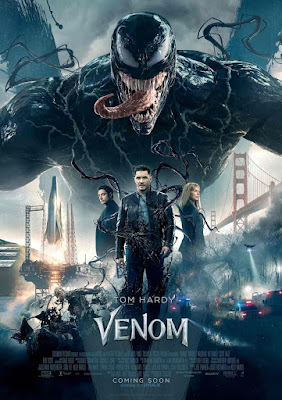 Eddie Brock (Tom Hardy) is an investigative journalist who happens to disrupt his last assignment resulting for him to get fired. He almost lost everything, including his career, house and fiancee. However, everything changes when he had contact to an alien symbiote called Venom and made him a live host. Soon, he learns that this gives him unimaginable strength and find a way to cooperate with his alter-ego to stop a mysterious organization from destroying the whole planet.

We read some of the comments telling that Venom is compared to Fantastic Four or Catwoman. It is also sitting on an audacious 29% rating at rotten tomatoes' website. Therefore, we attended last night's screening with a very low expectation thinking that this film would suck a lot, but it was just kind of absurd to treat this film when Venom was pleasing from start to finish. I just had one quick question to the critics; Did we watch the same film?

Venom has plot holes and forgivable loose ends, but it doesn't take away the fun and entertainment factor throughout. It is genuinely funny too as the humor is spread evenly and never had a dull moment in its almost two-hour run time. The CGI effects were pretty decent especially while watching it on the gigantic IMAX screen.

The film also got a huge amount of positivity with Tom Hardy carrying the titular role. He always shows his versatility and consistently brings his talent when it comes to comedy. It's also a plus to have a great supporting crew to back Hardy up with the very pretty Michelle Williams leading the way. You also got the very talented Jenny Slate for added flavor, and even he is drawn thinly Riz Ahmed capitalized to become an effective and worthy villain.

Overall, Venom deserves this standalone film and what a way to announce his re-entry to the cinematic universe filled with superheros. It has a lot of decent laughs, imaginative fight sequences and a stirring central performance coming from Tom Hardy. It just needs an R-rating and follow Deadpool's footsteps in its sequel to make a bigger splash.

Note: It has two mid-credit scenes with the one giving you a five-minute clip from another universe .