Slappy's The Star, Not a Dummy, in “GOOSEBUMPS 2: HAUNTED HALLOWEEN” 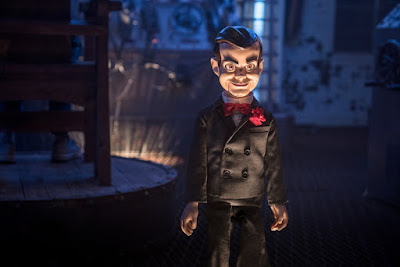 Moviemakers have lived by the belief that its biggest performers shouldn’t be wooden. But that’s a credo that could be thrown out the window when it comes to the unquestionable star of the Goosebumps 2: Haunted Halloween: Slappy the Ventriloquist Dummy. Who else could conjure dozens of monsters to wreak ridiculous havoc?
Slappy was first introduced in the 1993 Goosebumps book: Night of the Living Dummy.  R.L. Stine drew inspiration from other authors, including Ray Bradbury and Rod Sterling, but the real idea came from his memories watching a classic fright flick.  Stine says, “Sometime in my childhood I saw an old British movie called Dead of Night, which had three horror stories in it -- one of them was about a ventriloquist whose dummy comes to life and just takes over the ventriloquist’s life and ruins it. And I think was one of my inspirations for Slappy, remembering that old British movie.” 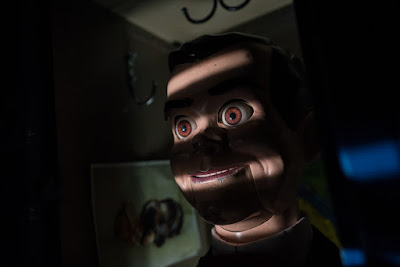 Producer Deborah Forte reiterates the author’s sentiments when she says Slappy reminds her of the classic conceit where something safe, funny, and entertaining – like a ventriloquist dummy – can be repurposed to send chills down your spine, and then remind you of those fun childhood scares you had as a kid.
In Goosebumps 2: Haunted Halloween, Slappy is operated by actor Avery Lee Jones, but his physical performance is also coordinated with the help of four different yet uniquely Slappy puppets, all courtesy of Legacy Effects in Los Angeles. The first puppet is the “hero” puppet, a fully animatronic version that allows for remote control movement of Slappy’s eyes, neck, and face, and features a head that can rotate 360 degrees. The legs and arms are manipulatable by rod, and the fingers are poseable. Legacy also went one step further and created an animatronic set of hands, which are utilized for real-life action, like playing video games. 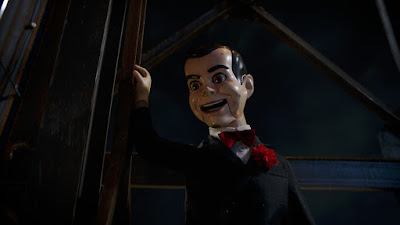 The second puppet is partially animatronic, known as the “simple” animatronic version -- this Slappy has a mechanical mouth only, but features poseable eyes, eyebrows, and eyelids. Third is the “stunt” puppet, a full rubber version with 3D-printed eyes so he looks identical to the other versions but can take force to the body. This is the puppet that the kids operate because it is the lightest, there are no mechanics, and it’s not easily breakable. Last, but not least, is the original Slappy puppet, a working ventriloquist doll, first seen in the original Goosebumps movie.
Madison Iseman says her co-star makes for an eerie onscreen foil. “It’s weird to see Slappy in the first movie and then acting with him in real life because he is just as terrifying as he is on screen,” says the actress. “I keep waiting for him to come to life and just start talking. We definitely have our fill of Slappy - rubber Slappys, mechanical Slappys - there’s a lot of Slappys here on set.” As for the puppet’s performance, Iseman praises Jones. “He does such a good job embodying Slappy – it’s really impressive.” 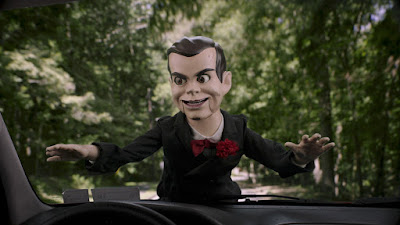 In playing the malevolent doll, Jones was stoked that the character was a practical effect, visible on set, and not a digital one. “As a kid who grew up loving puppets and absorbing as much puppet content, all books and movies I could possibly get my hands on, I would have loved knowing that there was a real puppet in this movie,” says Jones. “I would have loved this as a kid, just being able to see what I love on screen and knowing it's not a cartoon. He's real. He's there. The actors have something to interact with and there can be a little more interplay with the puppet than with an animated character.”

About Goosebumps 2: Haunted Halloween
Goosebumps 2: Haunted Halloween follows the Quinn family – high school senior SARAH (Madison Iseman), her middle school brother SONNY (Jeremy Ray Taylor), and their mother KATHY (Wendi McLendon-Covey) -- into an entirely new set of spooky, exciting, and funny events.  Sonny and schoolmate SAM (Caleel Harris) are best friends with a side job as the “Junk Brothers,” collecting discarded stuff other people don’t want. But it’s a gig that unfortunately leads them right into the path of (gulp) SLAPPY (Avery Lee Jones), the mischievous ventriloquist dummy from an unpublished Goosebumps book.
At first, Slappy seems to want nothing more than to be part of the Quinn family, but when his hijinks go too far, Sarah, Sonny and Sam realize that this pernicious puppet must be stopped.  Rejected in his obsessive need to be a member of the Quinn household, Slappy decides to build his own “family” by kidnapping Kathy and bringing all of his Halloween friends back to life - including new right-hand Ogre WALTER (Chris Parnell).
As Halloween transforms their sleepy town into a full-on monster mash-up, boasting such hilariously freaky creatures as giant gummy bears and creepy garden gnomes, Sarah, the boys, and neighbor MR. CHU (Ken Jeong) team up to save Kathy and the town from Slappy’s wicked plan.
Directed by Ari Sandel, the screenplay by Rob Lieber. Story by Rob Lieber and Darren Lemke.  Based on The Goosebumps Books written by R.L. Stine. 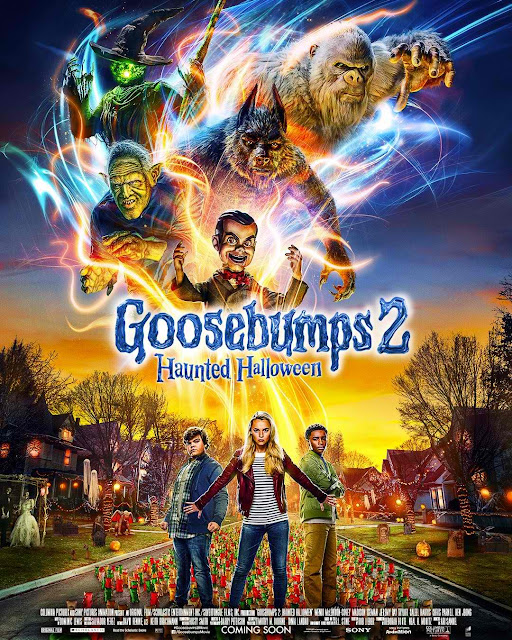