Viva Films latest romantic comedy offering will bring the audience to experience the beauty of Iceland. This is the first time a Filipino film to be shot there where the team took the ring road and went around the country by car in one week.

This also features the first movie team-up for Paolo Contis and Alessandra De Rossi, who had been friends for a very long time. They have worked before with various TV shows and projects so working with each other isn't new to them. This became an advantage as they acted natural in the set and showed a palpable chemistry that the audience can easily appreciate. The two constantly tease each other in the set and had a lot of fun while making the film, so they expect that the viewers will love the film as much as they do.

Iceland is the always been the dream country for Alessandra, and she feels that it is her second home because she identifies herself so much with Bjork - Iceland's Music Star contribution to the world. She is excited to share her latest project and hopes that it could follow the same success of Kita Kita. We all know that Alessandra can be an outstanding actress whoever she is paired with.
The film is directed by Ms. Veronica Velasco, who helm the likes of  I, Do (2010), Tuhog (2013) and Dear Other Self (2017). She also did several TV commercials and the TV series Oh My G! which starred Janella Salvador and Marlo Mortel. 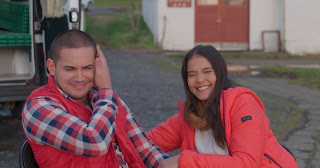 Let us all experience Iceland and watch the romantic getaway of Paolo and Alessandra in Through Night and Day. Opens November 14 in cinemas nationwide under Viva Films.