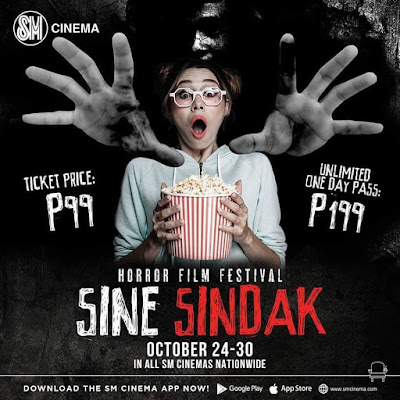 This coming Halloween, prepare yourselves to be horrified and get ready for your loudest scream as SM Cinema, the largest film exhibitor in the country, together with CrystalSky Multimedia, a key distributor of  internationally renowned films, brings you the scariest film fest of the year, the 1st ever Sine-Sindak Horror Film Festival! 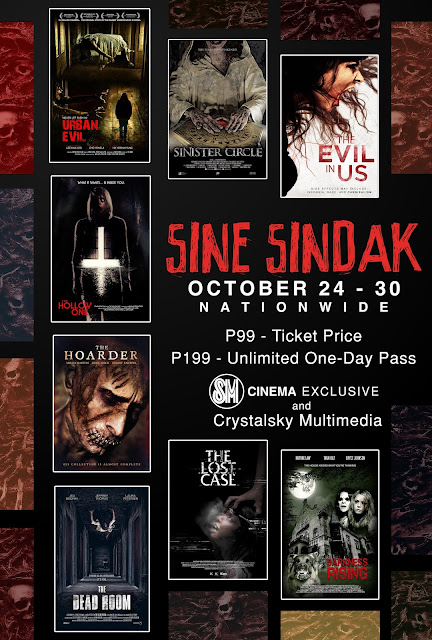 The Hoarder (USA)
Ella (Mischa Barton) discovers her boyfriend is renting a secret storage unit, which she initially thought her partner is using as a hideout for his affair. Unfortunately, she together with her best friend Molly (Emily Atack), discover something more terrifying instead. She will also meet a group of strangers to help her face a deranged killer lurking in the darkness.

The Dead Room (New Zealand)
Witness the terrifying ordeal of two cynical scientists (Jed Brophy and Jeffrey Thomas) and a young psychic (Laura Petersen) as they encounter a powerful spirit protecting the secrets of an old farm house.

Sinister Circle (Peru)
Released by Universal international Pictures in Peru.    A skeptical psychologist returns to the stage where a collective tragedy took place when playing the ouija and her mother was involved. She and her son Julio will be involved in strange events taking starring an ancient ouija board and a band of sinister individuals who are determined to do anything to preserve the precious treasure, which will emerge one of the most powerful evil force.

Darkness Rising (USA)
Madison (Tara Holt) together with her friends, Jake (Bryce Johnson) and Izzy (Katrina Law), visits their old house where her family was massacred. And as the lone survivor, she looks for her mysterious past but unfortunately, she also awakens the detrimental evil residing there.

Hollow One (USA)
Rachel Wade (Kate Alden) and her younger sister go to an isolated community and find their missing father after the tragic death of their mother. Instead of getting answers, Rachel must face her family’s dark history and a mysterious figure to fight for their survival.

The Lost Case (Thailand)
A Thai movie, The Lost Case follows the story of two newbies in a production company producing a popular television show called Ghost Doctor TV. They were assigned into a suicide case and as they continue investigating, the two are about to deal with the most horrifying and terrifying encounters of their lives!

Evil In Us (Canada)
Six school friends meet up for a Fourth of July celebration on a remote island off the Washington coast for a weekend of fun and partying. But the good times quickly turn into a nightmare when they unknowingly take a new bio-active drug containing a virus that causes fits of psychotic rage. Only one girl, Brie, doesn’t take the drug and she alone must fight to stay alive as her friends slowly turn into bloodthirsty cannibals. Trapped on the island, Brie must endure the unimaginable in a desperate battle for survival.

The House On Pine Street (USA)
A psychological horror about a young woman coping with an unwanted pregnancy after moving into a seemingly haunted house.

Exit Humanity (Canada)
In the aftermath of the Civil War an unexplained outbreak of the walking dead claims the life of Edward Young s wife while his son disappears. This sets him off on a harrowing journey into the plagued countryside facing off challenges not just from the ferocious undead but also from the living.

As a treat to the brave moviegoers, a Sine-Sindak Horror Film Festival ticket is priced at Php 99.00. And for those who want to finish the scary ride and enjoy all the horror flicks, an unlimited all-day pass is also offered at Php 199.00 each.

Catch Sine-Sindak movie offerings in SM Cinema branches and Walter Mart Cinemas nationwide from October 24 to 30, 2018. Book your tickets through the website, www.smcinema.com or download the SM Cinema mobile app.