SNEAK PEEK: Trailer for this weekend’s new episodes of Korean drama series ‘Mr. Sunshine,’ from the creators of ‘Goblin’ and ‘Descendants of the Sun’ 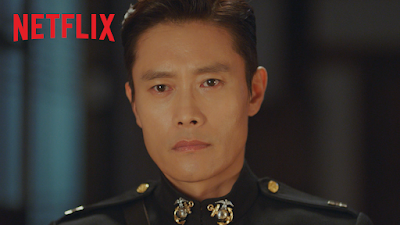 “Please protect Ae-sin,” says Ae-sin’s grandfather in the trailer for this weekend’s upcoming new episodes of Mr. Sunshine. “It must be someone who would protect her no matter what. Someone who would do it with utmost perfection.” It is not clear to whom he is speaking but shots of Eugene Choi (Lee Byung-hun) and Goo Dong Mae (Yoo Yeon-seok) are shown in between. And towards the end of the trailer, Kim Hee-sung (Byun Yo-han) is shown with streaks of blood on his face.
Watch the trailer HERE.
Based in Shinmiyangyo, or the US expedition to Korea in the late 19th century, Mr. Sunshine tells the story of a Korean boy born into a family of house servants who runs away to board an American warship, later to return to his homeland as a US marine officer. He falls in love with an aristocrat’s daughter and discovers the dark scheme to colonize the country that he once ran away from. Check out the episodes for Mr. Sunshine only on Netflix.
Check out the episodes of Mr. Sunshine only on Netflix and also visit http://netflix.com/mrsunshine for more news and info.