Ready to celebrate? "ELITE" is coming to Netflix on October 5 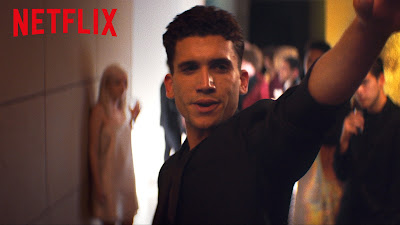 Welcome to the world of ELITE! Coming of age dramas, interrelations, different class struggles, love and a murder to be solved! ELITE launches globally on Netflix October 5, 2018.
Watch the ELITE date announcement video HERE.
The shows marks the reunion of La Casa de Papel’s (Money Heist) María Pedraza, Miguel Herrán, and Jaime Lorente, who star amongst fresh new faces: Itzan Escamilla (Cable Girls, The Ministry of Time), Miguel Bernardeau (Ola de Crímenes), Arón Piper (15 Years and One Day), Ester Expósito (Estoy Vivo), Mina El Hammani (El Príncipe), Álvaro Rico (Velvet Collection), and Omar Ayuso (debuts with ELITE). Adding to the cast is Danna Paola (Dare to Dream), currently amongst Mexico’s most popular actresses and singers.
ELITE is Netflix’s second Spanish Original series and is directed by Ramón Salazar (Sunday’s Illness, Three Steps Above Heaven) and Dani de la Orden (El Mejor Verano de mi vida, Party Town), written by Carlos Montero (The Time in Between and creator of Physical or Chemical) and Darío Madrona (Génesis, La chica de ayer and co-creator of the very successful The Protected).
Las Encinas is the best and most exclusive school in Spain, where the elite send their children to study. It's also where three working class kids have just been admitted after their academy was collapsed and the local council divvied up the students between other schools in the area. They thought that they'd lucked out...but maybe they weren't so lucky after all.
The clash between those who have everything and those who have nothing to lose creates a perfect storm that ultimately ends in a murder. Who is behind the crime? Is it one of these recent arrivals from a different world? Or is there something deeper hiding beneath the surface?
The show is executive produced by Zeta Audiovisual (Ahora o Nunca, Three Steps Above Heaven, I Want You) with the first season consisting of 8 episodes and entirely shot in 4K.
For more news and info about Elite follow their social media channels at:
Facebook: /NetflixElite/
Instagram: @elitenetflix

About Netflix
Netflix is the world's leading internet entertainment service with 130 million memberships in over 190 countries enjoying TV series, documentaries and feature films across a wide variety of genres and languages. Members can watch as much as they want, anytime, anywhere, on any internet-connected screen. Members can play, pause and resume watching, all without commercials or commitments.
Labels: Elite Netflix Press Release