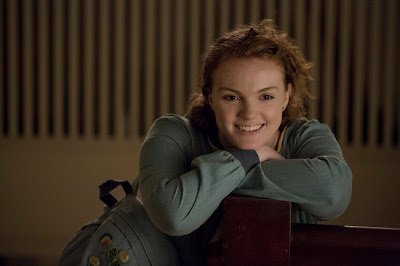 In Sierra Burgess Is A Loser, Shannon Purser (of Stranger Things fame) plays the titular character, a straight-A student who never cared about not fitting the stereotypical definition of what it is to be attractive in high school -- until a case of mistaken identity leads to an unexpected romance, making her lose her self-confidence and, quite literally, her own identity. This upcoming Netflix rom-com, premiering on Friday, September 7, will make viewers giddy with kilig, especially with Noah Centineo -- fresh off making fans fall head over heels in love with Peter Kavinsky in To All the Boys I’ve Loved Before -- playing Jamey, the hot but smart and sensitive quarterback Purser’s Sierra flirts with and falls for via texting. 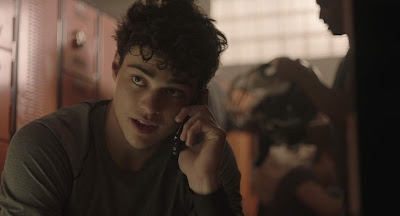 This is not a drill: The internet’s boyfriend Noah Centineo in a locker room scene in Sierra Burgess Is A Loser.

“I love Sierra because she isn’t a trope,” says Purser of the first lead character she’s ever played. “She’s not the traditional love-obsessed nerd or the angry, angsty outcast. She’s not desperate for male attention, she just falls head over heels in love for the first time and has to figure out how to love herself in the process.”
Lucky for Sierra Burgess, the boy she falls head over heels in love with for the first time is “more than just a hot jock,” as Sierra says in the trailer. Watch the trailer to Sierra Burgess Is A Loser HERE.
A modern retelling of the Cyrano De Bergerac story, Sierra Burgess Is A Loser is the latest title in Netflix’s slate of romantic comedies that have been winning hearts all over the world - The Kissing Booth, Set It Up, Alex Strangelove, and To All the Boys I’ve Loved Before. Catch a glimpse of these love stories (and fall in love!) by watching this special “Season of Love on Netflix” video, set to the tune of the Apo Hiking Society’s classic “Panalangin.”
“People seem to be looking for more optimistic stories that inspire given the state of the world, and maybe that has something to do with a resurgence of rom-coms. It’s definitely an escape to a warm place,” says Sierra Burgess Is A Loser director Ian Samuels. “Sierra Burgess is important in the trend because it does have a core heart of value with its themes of self-confidence, universal human experience and empathy. I wanted the heart and messaging of the movie to feel modern and turn the genre in unexpected directions. Music is an integral part of the movie as well that will set this apart. I knew that I wanted to score with songs, like a teen mix tape. But, like the movie, I didn’t want that mix tape to feel top 40. I wanted something fresh and emotional and timeless YA neon-feeling.” Get ready for those NSS-inducing feels!
Sierra Burgess Is A Loser premieres only on Netflix on Friday, September 7.

About Sierra Burgess Is A Loser

SIERRA BURGESS IS A LOSER is a modern rom-com retelling of the Cyrano de Bergerac story set in high school. The story centers on Sierra (Shannon Purser), an intelligent teen who does not fall into the shallow definition of high school pretty but, in a case of mistaken identity that results in unexpected romance, must team with the popular girl (Kristine Froseth) in order to win her crush (Noah Centineo).