Watch the trailer for ‘Atypical’ season 2, new season premieres on Netflix on September 7 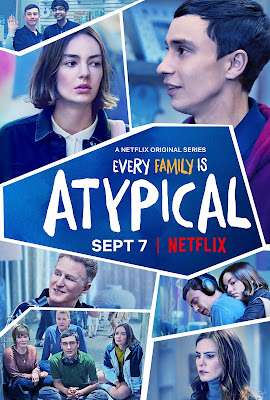 “For most mammalian species, survival depends on knowing and sticking with your pack,” narrates Sam Gardner (played by Keir Gilchrist) in the newly released trailer for the second season of Atypical. “But the members of my pack keep migrating -- to other schools, to other houses… or just away from me.”

How will Sam and the rest of the Gardner family deal with the changes caused by the events in the first season? Find out when season 2 launches on Netflix on September 7.

In the meantime, catch a glimpse of the Gardners in the season 2 trailer below

Atypical is a coming of age story that follows Sam (played by Keir Gilchrist), an 18-year-old on the autistic spectrum as he searches for love and independence. While Sam is on his funny and emotional journey of self-discovery, the rest of his family must grapple with change in their own lives as they all struggle with the central theme: what does it really mean to be normal? Jennifer Jason Leigh stars as his mother, Elsa, who is on her own journey of self-discovery. Michael Rapaport plays his father, Doug. Brigette Lundy-Paine (Margot vs Lily, The Glass Castle) plays Sam’s sister, Casey.

For more info and new about Atypical visit http://netflix.com/atypical

About NetflixNetflix is the world's leading internet entertainment service with 130 million memberships in over 190 countries enjoying TV series, documentaries and feature films across a wide variety of genres and languages. Members can watch as much as they want, anytime, anywhere, on any internet-connected screen. Members can play, pause and resume watching, all without commercials or commitments.