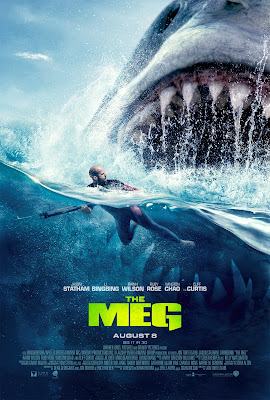 
Jonas Turner (Jason Statham) is a professional deep-sea rescuer who went semi-retired after failing to save everyone in his last rescue mission. People thought that he went crazy after claiming that there is a creature that attacked his crew under the ocean. However, when he found-out that his ex-wife (Jessica McNamee), and her crew are trapped at the bottom of the ocean; Jonas is forced to go back and save them as he once again meets the 75-foot-long shark called as the Megalodon.

It is safe to say that The Meg is pretty ridiculous in every way, but it has a lot of elements that could easily entertain its target audience. It has a lot of surprising and thrilling moments plus some of the most impossible stunts that they pulled off neatly. It also has a romantic sub-plot that we shouldn't care in this kind of film, but we are actually hooked into it bringing more color to the already enjoyable picture. 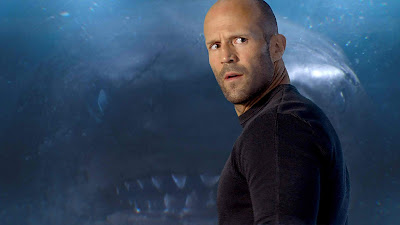 In every shark film, we are always longing for blood and chomping of bodies to paint the sea red and yes, they have managed to sink in those large teeth to many victims. There are a lot of crazy ideas and exciting scenes that were created that is best to be seen on an Imax screen. The visuals are pretty decent in all angles and they may have successfully injected some of the formulas made from different shark films from the past.

The Meg also has a great set of actors to bring in more energy to the film. Jason Statham already proved that he can take crooks or terrorist on a fist fight, so he battles a shark for a change. He has the charisma to spark any film, so he easily became the human highlight reel for this flick. He also connected well with Bingbing Li to make it more interesting at some point, and we loved the inclusion of the highly energetic kid Sophia Shuya Cai who reminds us of the little girl in Mircale Cell no. 7.

Overall, The Meg is ridiculously entertaining and a solid popcorn movie to experience on a big screen. What more can you ask after a Jason Statham versus a prehistoric shark showdown?