“HOTEL TRANSYLVANIA 3” Introduces The Van Helsings to the Monster Mash 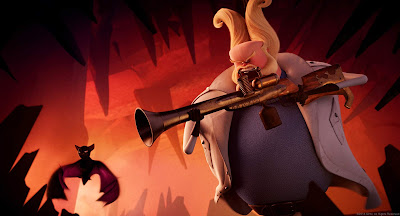 Two new pivotal characters are introduced in Columbia Pictures’ adventure comedy Hotel Transylvania 3: A Monster Vacation (now playing in Philippine cinemas).
They are Ericka (voiced by Kathryn Hahn) and Abraham Van Helsing (Jim Gaffigan).
The human captain of the ship, Ericka, is smart, adventurous and holds a secret that threatens to send Drac’s monster vacation off course.  She runs this “hotel on the water” and has no problem butting heads with Drac. 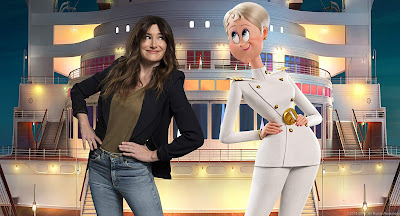 “Ericka is very charming, very personable, and has an adorable haircut, but what we don’t know right away is that Ericka is actually Ericka Van Helsing, part of the family that’s been hunting Dracula for generations without ever managing to kill him,” says Hahn.  “Ambitious Ericka plans to be the Van Helsing that succeeds where all others have failed.”
“I’ve always wanted to play a villainous character,” Hahn continues.  “I’ve loved the Hotel Transylvania movies – I’ve seen them multiple times with my kids – so I was very excited to jump on board.  You really feel the love between this group of monsters.” 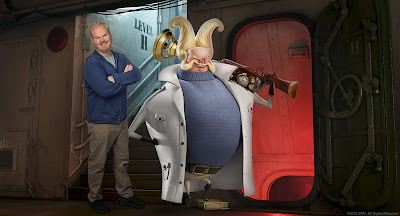 Meanwhile, Abraham Van Helsing— professor, inventor and monster-hunter— is Drac’s self-proclaimed arch rival. Humiliated by Drac long ago, he swore he would get revenge even if it took a hundred years to achieve it. Luckily he’s discovered the secret to immortality— kale!
“Van Helsing is an iconic character,” says Gaffigan.  “He’s the most famous monster hunter of all time.  I was excited to make him the ultimate match for Dracula – and when I saw the character and found out he’s also a very good-looking guy, I figured it would make sense that I would play him,” says Gaffigan.

About Hotel Transylvania 3: A Monster Vacation
In Sony Pictures Animation’s Hotel Transylvania 3:  A Monster Vacation, join our favorite monster family as they embark on a vacation on a luxury monster cruise ship so Drac can take a summer vacation from providing everyone else’s vacation at the hotel. It’s smooth sailing for Drac’s Pack as the monsters indulge in all of the shipboard fun the cruise has to offer, from monster volleyball to exotic excursions, and catching up on their moon tans. But the dream vacation turns into a nightmare when Mavis realizes Drac has fallen for the mysterious captain of the ship, Ericka, who hides a dangerous secret that could destroy all of monsterkind.
Sony Pictures Animation presents Hotel Transylvania 3:  A Monster Vacation.  Featuring the voices of Adam Sandler, Andy Samberg, Selena Gomez, Kevin James, David Spade, Steve Buscemi, Keegan-Michael Key, Molly Shannon, Fran Drescher, Kathryn Hahn, Jim Gaffigan, Joe Jonas, Chrissy Teigen, Jaime Camil, and Mel Brooks.  Directed by Genndy Tartakovsky.  Produced by Michelle Murdocca.  Written by Genndy Tartakovsky and Michael McCullers.  Music by Mark Mothersbaugh.  Imagery and Animation by Sony Pictures Imageworks Inc. 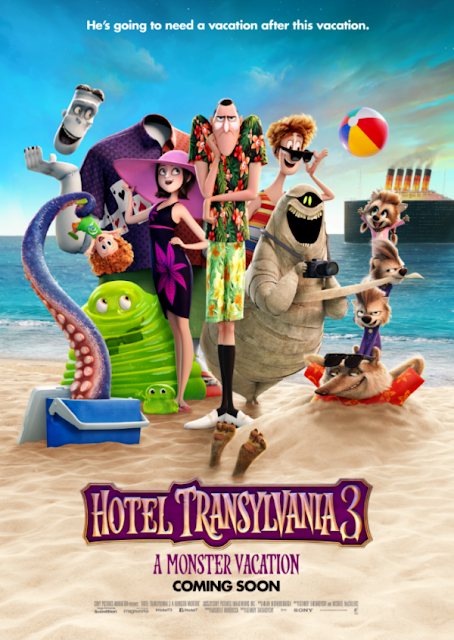