Death Masks, Ghosts of Soldiers and Other Intriguing Trivia on “THE NUN” Set

New Line Cinema’s The Nun is the newest – and darkest – chapter in the Conjuring Universe of films.  It precedes the events of the previous films: Annabelle: Creation, Annabelle, The Conjuring and The Conjuring 2.
Check out the following interesting trivia about the making of The Nun.
The Nun was filmed entirely in Romania. Although the film is set in 1950s, most of the action takes place in 14th century buildings.
Castel Film Studios in Izvorani housed four tombs in the “Tomb Room” set. The tombs had death masks cast from the faces of director Corin Hardy, screenwriter Gary Dauberman, director of photography Maxime Alexandre, executive producer Michael Clear, and 1st assistant director Harry Boyd. Audiences can experience Dauberman’s “tomb” when the characters first pass through the Tomb Room.

Makeup department head Eleanor Sabaduquia, along with James Wan, created the look of the demon Valak / Nun.  The makeup is hand painted – using a simple, single prosthetic appliance to cover the eye brows – so no two applications were identical.
The production used so much black fabric for nuns’ habits that the factory in Romania from which the fabric was sourced ran out of material.
Director Corin Hardy cast Demian Bichir as Father Burke after following the actor’s career since his role as Fidel Castro in director Steven Soderbergh’s Che. Bichir calls his character in the film, Father Burke, “the James Bond of soul savers, saving the world one soul at a time.”  Hardy has said that Burke is the “Dirty Harry of exorcists.”

Hardy had to convince Demian Bichir not to perform a stunt in which the character of Father Burke falls backward into an open grave.
As part of her preparation and research to portray Sister Irene, Taissa Farmiga watched The Nun's Story, starring Audrey Hepburn.  Taissa is not a horror movie fan and had demon-fighting dreams while on location for The Nun.
Taissa sought advice from her sister, Vera Farmiga, who had starred in The Conjuring and The Conjuring 2, about how to deal with the daily frights that came with working on a horror film.  Vera told her younger sister to seek calm at the end of the day and to leave the stress and horror at work.
Taissa tried to watch The Conjuring four times but was too frightened to see the blockbuster horror film through to the end.

James Wan had a very specific look in mind for the demon Valak, aka The Nun, and the filmmakers looked at hundreds of candidates, including a few male actors, before casting Bonnie Aarons.  The role of Valak, aka The Nun, was created for an additional shooting period for The Conjuring 2.
Once production was underway, director Corin Hardy suddenly remembered that, years earlier, Aarons had nearly given him a heart attack with her frightening performance as a homeless person in just one quick scene in the film Mulholland Drive.
While filming a particularly atmospheric scene in an old Romanic fortress in Mogoșoaia, Hardy had a supernatural encounter with what he believes was a pair of ghosts of Romanian soldiers, whom Hardy believed were curious about the filming.
About “The Nun”
Filmmaker James Wan, director of the record-setting horror hits “The Conjuring” and “The Conjuring 2,” explores another dark corner of that universe with “The Nun.”  Directed by Corin Hardy (“The Hallow”), the new fright-fest is produced by Wan and by Peter Safran, who has produced all the films in “The Conjuring” franchise.

When a young nun at a cloistered abbey in Romania takes her own life, a priest with a haunted past and a novitiate on the threshold of her final vows are sent by the Vatican to investigate.  Together they uncover the order’s unholy secret.  Risking not only their lives but their faith and their very souls, they confront a malevolent force in the form of the same demonic nun that first terrorized audiences in “The Conjuring 2,” as the abbey becomes a horrific battleground between the living and the damned.
“The Nun” stars Oscar nominated Demian Bichir (“A Better Life”) as Father Burke, Taissa Farmiga (TV’s “American Horror Story”) as Sister Irene, and Jonas Bloquet (“Elle”) as local villager Frenchie. 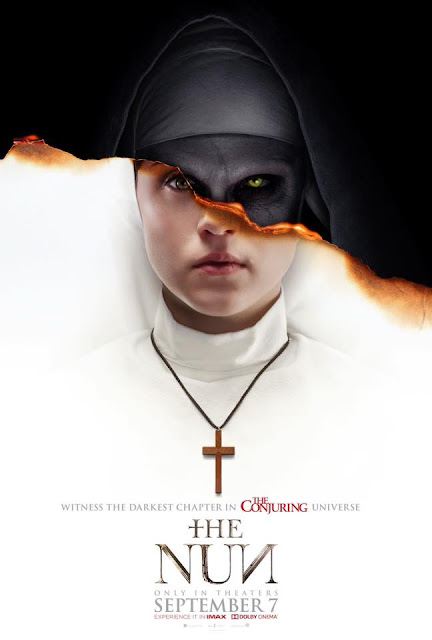