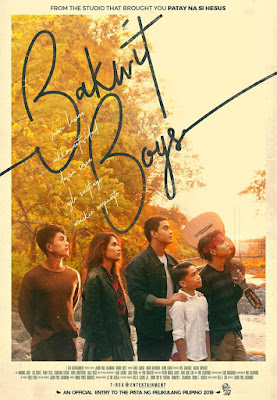 After the devastating typhoon that hit their hometown in Isabela, The Datul brothers are forced to evacuate to the farm of their grandfather (Nanding Josef) in Pampanga. The boys have a hidden talent with them as their second brother Philip (Nikko Natividad) writes the songs for their band. The eldest brother, Elias (Vance Larena) is the lead vocalist together with the youngest Sonny (Mackie Empuerto) while Joey (Ryle Santiago) plays the guitar. One day, they were invited to play at a fiesta to earn some cash, and the emcee introduces them as the "Bakwit Boys." Their performance got the attention of a rich city girl named Rose (Devon Seron), who offers them some help for them to get known. Will the boys have a chance to hit the spotlight or will poverty drags their dreams down?

The only musical themed film in this year's festival is already making waves through different social media platforms as Bakwit Boys was graded A by the Cinema Evaluation Board. Lucky for us, we are the first few lucky ones to watch the film in advance at the red carpet premiere where the casts and different famous personalities came to support the film despite the bad weather. For us all who came, we are all treated with an inspiring tale sparked with original composed music that will stick on your heads the rest of the day.

Director Jason Paul Laxamana once again showcase his style and talent in film making listing him as one of the most in demand directors in the country today. He has that unique style of direction in which the story is always set straightforward and sentimental atmosphere. He also let his actors play naturally and lift all the pressure out of them to get a much better result.

What makes Bakwit Boys a little more special is the raw talent developed within the cast. You already have the reliable Devon Seron who blossomed here and had the chance to demonstrate her talent in music. She is also a solid actress who basically needs more movies to prove that she is worthy to join the big leagues. The hashtags members, Ryle Santiago and Nikko Natividad proved that they are not just pretty boys but could also act well. They both have charming personalities and just need more boost of self-confidence in their performances. Mackie Empuerto, on the other hand, already had that strong voice but also had that talent in acting. We also had a solid showing from Vance Larena in his film debut as a lead star. This guy can act well and sing magnificently, so we hope that this film becomes a window of opportunity to him to reveal his talent.

The story is pretty simple and uplifting by all means. It is compelling right from the beginning and revolves through the beautiful music incorporated with the stunning cinematography. We also love the humor thrown into different serious situations to lighten up the mood for a bit. Another highlight is the brotherly love where-in you can feel the authenticity where you can easily relate to the situation, especially if you have an older brother who loves you but bullies you around.

Overall, Bakwit Boys is an inspiring musical film that teaches us to never stop dreaming and continue to reach for it. It has that heartwarming message and satisfying outcome at the end and will leave you an awesome list of tracks that you will gladly include to your daily playlist.