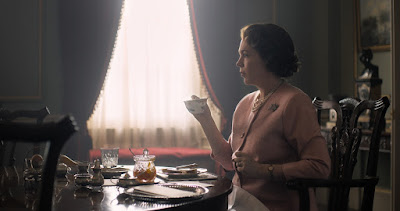 Netflix has released a first look image featuring Olivia Colman as Queen Elizabeth II in The Crown season 3. The celebrated British actress takes over the role from Claire Foy, who portrayed a younger version of the Queen in the first two seasons of the critically acclaimed series.

For more news and information about The Crown Season 3 visit netflix.com/thecrown
and follow their social media sites at

About Netflix
Netflix is the world's leading internet entertainment service with 130 million memberships in over 190 countries enjoying TV series, documentaries and feature films across a wide variety of genres and languages. Members can watch as much as they want, anytime, anywhere, on any internet-connected screen. Members can play, pause and resume watching, all without commercials or commitments.
Netflix Press Release The Crown Season 3