I Love You, Hater: Movie Review 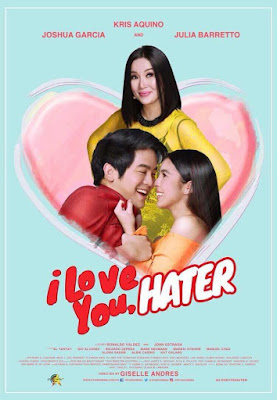 Joko (Joshua Garcia) is trying to get a decent job after he was scammed by an illegal recruiter while Zoey (Julia Barretto) needs to prove to the world that she is existent after his father refuses to identify him as her daughter. The two eventually meet when Sasha (Kris Aquino) opens a job vacancy as her new personal assistant. However, in order to get the position, the two must work and compete with each other. Will Joko and Zoey be on the same page or will their egos get into their way?

Last night, was the red carpet premiere of "I Love You, Hater" and as expected the cinema is filled with screaming fans who are all waiting to see the stars up close and personal.  This is the fourth film under the Joshlia love team, and now they are joined by the returning Queen of All Media, Ms. Kris Aquino.

Basically, the film falls to that typical Star Cinema constructive formula that still hasn't lost its touch in producing these kinds of enjoyable rom-coms. The film is anchored by tailor-made performances from the stars who simply lighted the screen with their impeccable charm and personality. Joshua Garcia already proved that he is a great and versatile actor a lot of times, and here he once again nailed his role with a lot of dedication. Julia Barretto, on the other hand, shows more maturity and gracefully performed as Zoey.  The two looked perfectly good off and on screen. They are  entertaining to watch as they act naturally and the "kilig" moments are just effortlessly thrown in different sequences.

Kris Aquino also hasn't lost her touch delivering her lines as the role given to her perfectly fits into her personality. It looked too easy for her but still, she provided that one particular scene that really touched our hearts. Other supporting casts also did a job well done with Al Tantay, Gio Alvarez, Mark Neumann, Markki Stroem and Ronaldo Valdez all making a splash out of their characters. Thanks to Director Giselle Andres, she brought out the best in everybody and skillfully delivers a surprise package to the viewers.

The story is quite simple, and yet it is entertaining in every scene. The movie is also boosted with a killer song revival by Unit 406 that is still stuck to my head, especially when I had that morning shower earlier. I love the timing and pace as it handed out a complete package that will definitely give the audience a reason to smile after exiting the cinema.

Overall, I Love You Hater is solid and compelling throughout and brings out the best out of the Joshlia tandem. It is one of those comfort rom-com films that are charmingly executed and amiable to watch.