“ALONG WITH THE GODS,” Korea's Most Expensive Production Will Open on February 7 in Philippine Theaters

Discover a world that is neither heaven nor hell, and where there is life after death, in the much-anticipated Korean fantasy movie of 2018, ALONG WITH THE GODS: THE TWO WORLDS.

ALONG WITH THE GODS is Korea’s most expensive production and it will be released in 2 parts. Based on the hit webcomic with the same title, it follows the story of a firefighter named Ja-Hong who died in the line of duty while trying to save a little girl. In Purgatory, he meets his 3 Afterlife guardians – Kang-Lim, Hewonmak and Deok-choon who will defend and help him go through 7 different Trials of Sin in order to be reincarnated. At the same time, the Afterlife guardians were also promised reincarnation by the ruler of the Afterlife, King Yeomra if they successfully defend 49 souls for reincarnation. Ja-Hong is their 48th client. Ja-Hong's journey to the 7 Trials of Sin is disrupted by his dead brother Su-Hong's Vengeful Spirit. Su-Hong died 2 weeks before his military discharge when a private accidentally shot him with a service weapon. Because of his unjust death, Su-Hong turns into a Vengeful Spirit and starts attacking the Afterlife. And as hidden facts surrounding his death are uncovered, Ja-Hong's innocence is questioned, risking his trial for reincarnation.

ALONG WITH THE GODS is directed by blockbuster and award-winning director Kim Yong-Hwa (200 Pounds Beauty, Take Off, Mr. Go), and is led by a superb all-star cast. Firefighter Ja-Hong is played by Cha Tae-Hyun, who is widely known by Filipino K-movie fans as the funny and charming guy in the 2001 movie My Sassy Girl. Fans will get to see a different side of Cha Tae-Hyun with his performance in Along with the Gods. Kang-Lim, the leader of Ja-Hong's Afterlife guardians is played by versatile actor Ha Jung-Woo. He will lead Ja-Hong's defense as he goes through the 7 Trials of Sin. Hewonmak, the Security Specialist among the guardians is played by Ju Ji-Hoon. He is the first one to risk his own life to protect his client and fellow guardians. Showing his dedication to his role, Ju Ji-Hoon trained for 2 months to prepare for his action scenes. The youngest of the guardians, Deok-Choon is played by young actress Kim Hyang-Gi. She has a full and warm heart and is sympathetic towards her client, making her an ideal and a promising lawyer to defend souls for reincarnation.

Aside from the superb cast, ALONG WITH THE GODS will also take audiences to worlds you never thought existed. According to the laws of Afterlife, all deceased must go through 7 trials over 49 days, and these trials are divided into 7 sin categories: betrayal, violence, filial piety, murder, indolence, deceit and injustice. Each sin has its own hell, and Director Kim used different elements to represent each hell: fire, water, metal, ice, mirror, gravity and sand. Creating these hells took almost 6 years of production, but the results are all worth it. 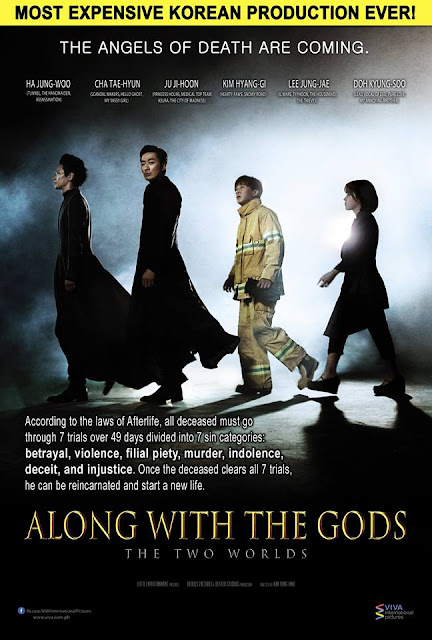 Experience a different world where only ALONG WITH THE GODS can take you, when it hits the big screen nationwide on February 7. From VIVA International Pictures and MVP Entertainment.